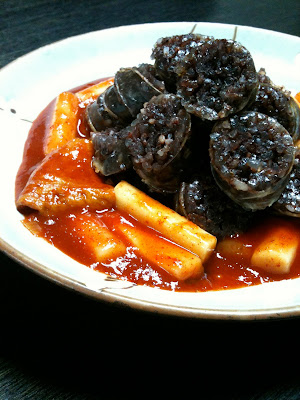 from unnamed food cart (near exit 4 of Oksu Station) [takeout]

Sundae (순대) is a Korean blood sausage.   A staple at the ubiquitous, though regrettably diminishing street food carts scattered throughout the city, it primarily consists of glass noodles, mass produced in a factory, probably in China nowadays, considered the "cheaper" variety, usually sold at 2,000 won per serving--a price that's been remarkably immune to inflation for at least a decade.  The other, "fancier" and therefore more expensive kind, maybe as much as 15,000 won per plate, is primarily made of glutinous rice, often by hand and sold in specialty restaurants, usually in a soup.  Hands down, I prefer the first kind, not only because it's more readily available but also because it has a cleaner flavor and lighter texture than its spicier, denser high-end cousin.  Both are typically served with additional tidbits of pig, such as liver, lung, heart, and the occasional ear or two.

Although sundae is usually served with coarse salt on the side as a dip, I prefer it with ddeokbokki (떡볶기) sauce. (I'll reserve commenting on ddeokbokki, spicy rice cakes, the quintessential street food of Korea, for another day.)

I live near Oksu (subway) Station, where 5 of these food carts are clustered near exit 4.  Having lived in the neighborhood on and off since 1997, I've had ample opportunity to sample them all.  The best one by far is the one closest to the exit.