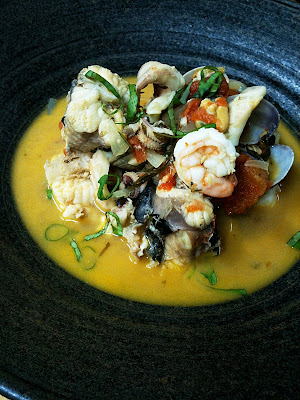 About five years ago, the wife and I were fortunate to find ourselves concurrently in different parts of Europe on separate business trips and took advantage of the opportunity to rendezvous in southern France after the work was done. As I'd explained to her in no uncertain terms while making the arrangements, the primary objective for choosing southern France as the destination was to stop by Vieux Port in Marseilles and eat bouillabaisse at the source.  Then, conditioned upon the successful completion of the primary objective, we would then be free to pursue subsidiary activities in Provence or Cote d'Azur or Monaco or wherever, so long as we were in the neighborhood.  She'd quickly acquiesced to the terms, which I'd taken for avidity only to discover later that it was apathy.  Indeed, when we arrived in Marseilles, she was suddenly "bouilla-what?" Long story short, due to her bullshit alternative itinerary, which I was stupid enough to follow, we ended up without any time to eat bouillabaisse.

To express in no uncertain terms how deeply the experience had wounded me, I griped/grieved/grumbled/groaned/groused about the grievance every day and twice on Sunday for the following year.  These days, only every month or so.  Now, whenever the wife seems poised to interfere with my plans, I simply say, "bouillabaisse," and she backs off.

Incidentally, I've wanted to try bouillabaisse since the summer of 1989, when the Beastie Boys released their classic album Paul's Boutique featuring a medley entitled "B-Boy Bouillabaisse."

With no plans for a return visit to southern France anytime soon, I went ahead and tried making it myself. I should've waited.