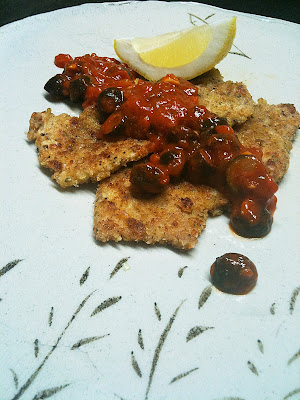 Having determined that schnitzel works best with a simple pork fillet (see 1.002 Pork Schnitzel;1.019 Beef, Pork Schnitzel; 1.065 Pork, Shrimp Schnitzel), I thought that I should come up with a sauce or some sort, which had been missing in my previous efforts. But rather than go through the effort of actually making something from scratch--isn't the schnitzel enough?--I decided to try canned marinara, along with some sliced black olives. Not bad.