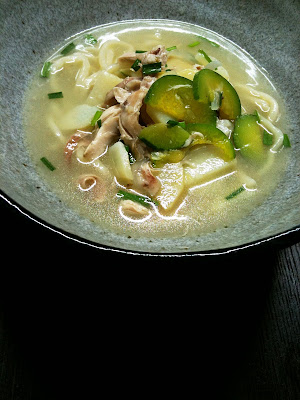 Arguably the most common of all Korean noodle soup dishes, kal guksu (칼국수) consists of flour noodles and often sliced potatoes and zucchini in a broth of some sort, typically chicken (as here) or anchovies or clams, all of which are equally popular. While "guksu" = "noodles (specifically in broth)," the "kal" = "knife" and refers to the traditional method of making the noodles by cutting the flattened/rolled dough into long/thin strips.

The chicken variation finds its way onto our table for reasons of convenience.   It usually starts with a whole chicken, which is simply boiled in water along with a few aromatics and seasonings (e.g., daepa, garlic, salt, pepper), removed from the water and torn into strips after it's done, dipped in soy sauce and eaten--a not-so-creative and not-even-really-a-dish dish called baeksuk (see 1.022 Baeksuk, 1.033 Baeksuk). The remaining liquid, strained of random bits and pieces, becomes a stock that can be used for porridge or kal guksu, either immediately following the baeksuk or later as a stand-alone meal. Chicken broth, which some people consider more along the lines of comfort food and thus prefer as such, will tend to be heavier, with more fat, than one from a seafood source. I prefer the latter, particularly with clams, but chicken is always available.