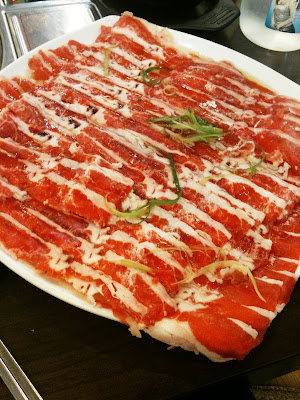 
Woo samgyeop is a Korean beef dish.  Consists of brisket, frozen, sliced razor thin, lightly marinated in a sweet soy dressing, and grilled over coals on a slotted plate.  13,000 won per 200 g, not including the marinade.  Typically, the term "samgyeopsal" refers to pork belly.  Whereas beef ("woo") doesn't have a belly cut, the brisket would come closest both in anatomical proximity (being the chest flap, just above the abdomen) and physical appearance (having a triple ("sam") layer ("gyeop") of fat/flesh/fat when sliced cross-sectionally).  While I'm sure that someone somewhere has done something similar, I've only seen/heard of it here.  I'm not even sure why they do it, notwithstanding samgyeopsal's immense popularity, as brisket is popular in its own right for barbecue, referred to as "chadolbagi (차돌박이)," and for soup/stew, referred to as "yangji (양지)."

We order it whenever we're dining with my father because he prefers beef to pork (maybe that's why they do it).