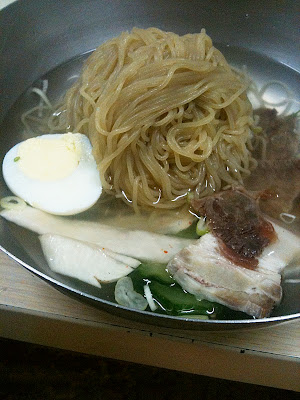 Mul naeng myeon (물냉면) (MNM) is a Korean noodle soup.  It consists of noodles--either buckwheat or potato starch--in a chilled broth--either beef or fish or white radish kimchi.  The toppings usually include slices of beef and/or pork, pickled radish, cucumbers, Asian pear, and half of a boiled egg.  Some diners add dashes of vinegar and Korean mustard (similar to wasabi but yellow), giving it a cool tartness.  The name of the dish literally means "water (mul) cold (naeng) noodles (myeon)." Despite the sweeping definition, it's not to be confused with other Korean chilled noodle soups, such as kimchi mari guksu (see generally 1.011 Kimchi Mari Guksu).  Furthermore, anywhere MNM is available, so too is its cousin bibim naeng-myeon, which consists of the same noodles served sans broth in a spicy red chili pepper sauce.  Naeng-myeon in Korea, both the mul and bibim varieties, can be found either in specialty restaurants or in barbecue restaurants that serve the noodles at the end of the meal.

MNM falls into 2 distinct styles, each of which has its loyalists, usually exclusive of the other.  Although both are essentially the same in that they consist of noodles in chilled broth, with more or less the same toppings, they differ remarkably in the texture of the noodles and the flavor of the broth.

One is Hamheung (함흥)-style (HHS), after the city, currently in North Korea, from which it purportedly originated.  The noodles, made from potato starch, are extremely chewy, to the point of being rubbery, necessitating a few preliminary snips of scissors before they can be eaten, even though they're thin, thinner than angel hair pasta.  The broth tends to be tangy, making it more immediately recognizable and therefore more accessible to the masses.  This is the style of MNM that has come to dominate both the domestic and international markets in recent years.  Unless otherwise noted, MNM is now HHS by default.

The other is Pyeongyang (평양)-style (PYS), also after the northern city from which it purportedly originated.  The noodles, made from buckwheat, are more doughy in texture, and thicker, not quite spaghetti but close.  The broth is beefy but totally dry, devoid of sweetness, seemingly insipid at first sip.  Some would argue that this style represents the real deal.  Indeed, restaurants specializing in PYS do appear to be predominantly patronized by older clientele, old people, who perhaps cling to lingering memories of "authentic" MNM from the north prior to the Korean War.

Recently, I've become a convert to PYS  but it was a struggle getting there.  Like people born after 1951, I grew up preferring HHS.  My parents, both of whom were born in the north prior to 1951, had always insisted that HHS was crap.  But in my first experiences with PYS, I couldn't get past the texture of the noodles and the taste of the broth.  Somewhere along the way, no specific turning point, reason or time, I began to find HHS intolerable: the noodles made me gag, literally, and the broth was just too sweet and sour.  Maybe I just got old.

Pyeongyang Myeonok, as the name would clearly indicate, specializes in PYS MNM.  By most accounts, it's one of the best in the business.  Maybe it's too hardcore for me, but I'm not a huge fan.