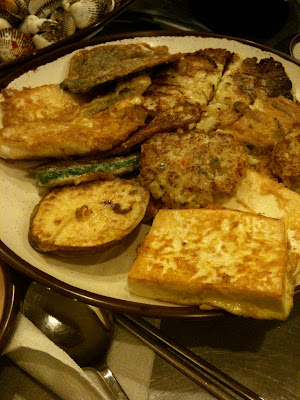 Jeon (전) is a broad category of Korean pancake.  The pancakes generally fall into one of two subcategories.   The first consists of an central ingredient that is sliced or otherwise formed into bite-sized pieces, lightly seasoned with salt and pepper, coated in flour and egg wash, and pan-fried in a touch of oil.  Common varieties include tofu, fish, ground beef, mushrooms, and ae-hobak (애호박) (a type of squash similar to zucchini).  The second subcategory consists of a several ingredients that are shredded or chopped into small pieces, mixed together in a flour-based batter, lightly seasoned with salt and pepper and maybe some additional spices, and pan-fried in a generous pool of oil.  Common varieties include scallions, soy beans, kimchi, seafood, or combinations thereof.  Both types are almost always served with some manner of soy-based dipping sauce.

I'd always assumed the term "jeon" to be Korean, but the etymology turns out to be Chinese in origin (see generally 6.215 Nanj Wans).