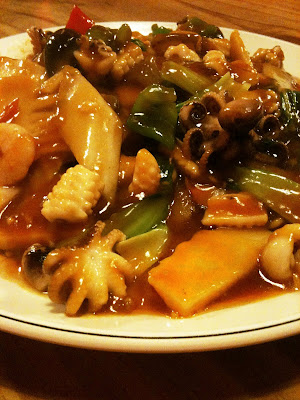 Happy Family is a Chinese seafood dish.  It consists of various seafoods (e.g., squid, octopus, shrimp, sea cucumber) along with a few veggies, in a garlic sauce, a bit spicy.  Here in Korea, it's called "palbochae (팔보채)," broken down as pal ("eight"), bo ("treasure"), chae ("sliced").  I suspect that the name, in China, refers or once referred to a vegetarian dish but underwent a semantic mutation when Koreans got a hold of it, much like "samseon (삼선)" (see 1.117 Seafood Jjajang-Myeon).  In any case, it's one of the Top Five most popular non-noodle dishes in the Korean-Chinese tradition.  For some reason, when the dish is served over rice as a meal, and not on a large platter to be shared by many, it's called "japtang bap (잡탕밥)," which loosely translates to "hodgepodge" (japtang) and "rice" (bap).   Good stuff either way.

I was wrong about this dish being Happy Family, which is a different dish (see generally 2.017 Happy Family).  This dish is in fact palbochae.