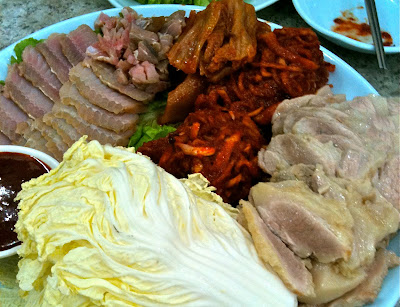 But hong-eo hoe (홍어회) is another thing altogether.  Though the name of the dish literally means "raw/sashimi" (hoe) + "skate" (hong-eo), it's not raw.  It's rotten.  The science, history, culture, and even fanaticism behind this so-called "delicacy" are far too complex, deep, and way over my head me, so I won't attempt to describe it in any detail.  When done "right," the smell of ammonia (think industrial-strength Windex) produced from the fermentation process is so intense that one literally has to hold one's breath while chewing and even for a few seconds after swallowing.  That's one of the draws, supposedly.  On the bright side, the ammonia masks the putrid odor of the decomposing flesh.   And there's an anesthetic effect, the tongue and throat left numb, but not enough to kill the rancid aftertaste.

For some reason, bossam and hong-eo hoe are often served together on the same plate as a combination called "samhap" (삼합).  Despite the wall of kimchi and other accompaniments separating the two, cross-contamination somewhere in the plating process had transferred traces of the ammonia over to the pork--effectively killing the meal for me.

A 6-hr bus ride, and our camping expedition found ourselves back at Lotte World, where we had gathered about 68 hours for the trip to Ulleung-Do.  Not quite ready to part ways, we set off in search of dinner.  We walked, with all our gear, towards the Sincheon Station area bustling with eats.  The others seemed to enjoy themselves.