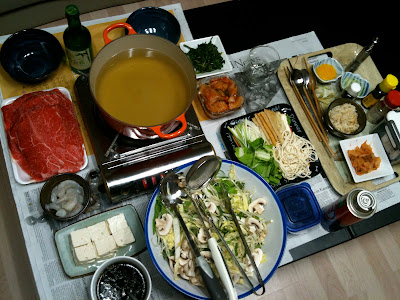 Shabu shabu is a form of Japanese hot pot (see generally Wikipedia on shabu shabu).  It works as follows: a diner will toss a couple slices of thinly sliced beef and vegetables into a boiling cauldron of stock, either an individual pot or a larger one at the center of the table for everyone to share--supposedly, the term derives from the sound made from everything swishing around--wait a few seconds for the ingredients to cook (to whatever degree of personal preference), remove them with chopsticks, dip them into a sauce of some sort, such as ponzu or sesame or peanut, eat, repeat.

The Korean variation, which is more or less identical up to that point, although the vegetable ingredients may vary a bit, takes the process to another level: after the meat and veggies are finished, the remaining stock, now more of a thick broth, is first used to make noodles and then afterwards, in the even thicker broth, rice porridge.

My own version--"shabu" + "ki"--consists of shredding all the vegetables and mixing them together.  I usually include napa cabbage, bean sprouts, onions, leeks, perilla leafs, celery, various types of mushrooms, as well as whatever greens happen to be available.  This allows for a wider variety of veggies, including some, like celery, that wouldn't work so well in larger pieces, or others, like bean sprouts, that wouldn't work so well independently.  Also, I find the combination of flavors in any given bite to be much more rich than that which could be derived from any single vegetable.  In the end, depending on how full everyone is, I may do the noodles and/or rice in the Korean style.  From start to finish, this is definitely one of the easiest/cheapest/fillingest/healthiest meals in my repertoire.