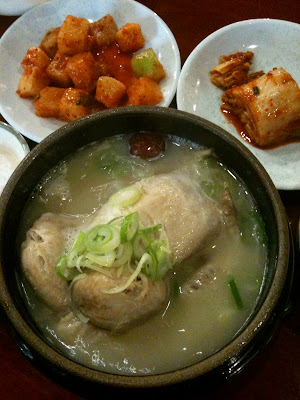 Samgye tang (삼계탕) is a Korean chicken soup ("tang").  It consists of a small whole chicken ("gye") stuffed with rice and ginseng ("sam") and a few other goodies boiled together and served in an earthenware pot.  From the commentary in English-language travel guides or in cookbooks, the dish would appear to be one of Korea's culinary masterpieces, though I've never really felt its presence outside the country. Even here, it's not widely available, limited to a few old-school specialty restaurants scattered throughout the city. For locals, it's most popular during the summer, particularly on the hottest day of the year, when its yin-yang properties supposedly provide some sort of relief from the heat.

I love chicken as much as the next guy, very likely more so, but I've never been a huge fan of this dish, especially when it's hot outside.

In Lotte World Adventure, a mini indoor amusement park within the city, a restaurant corner made up to look like a folk village offers various "traditional" menu items, including samgye tang.