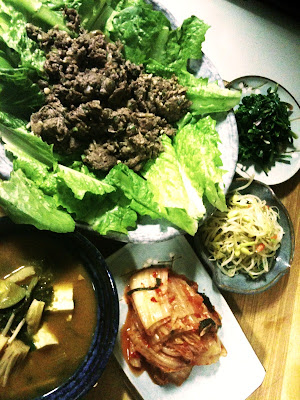 Bulgogi is a Korean beef dish.  It consists of thinly sliced beef in a sweet soy marinade, often with minced garlic, onions, scallions, or other basic aromatics.  The name derives from the words "bul" (불), which literally means "fire" in Korean and refers to the traditional method of cooking the meat over an open flame, and "gogi" (고기), which means "meat." Traditionally, the meat is beef, but variations with pork and seafood can also be found.  After it's cooked, the meat is often wrapped with fresh greens (e.g., red lettuce or perilla leafs) into a small bundle and eaten by hand.  One Korea's most iconic dishes.

My personal observations suggest that, although the dish has become a popular mainstay in Korean BBQ restaurants overseas, its presence on local menus has dwindled in recent years.  This is probably due to: (a) the exorbitant prices of Korean beef, aka "hanwoo" (한우), which can range anywhere from 4,000 won per 100 g to 12,000 won (about US$45 per pound), and those are supermarket prices; (b) consumer dislike/distrust of imported beef, particularly American beef in the wake of the mad cow scares in recent years; and/or (c) a growing belief that good beef is better consumed as is and that marinades are more appropriate for cheap cuts that require masking or tenderizing of some sort.  Whatever the reason, the availability of beef bulgogi here in Korea now seems to be limited to (i) expensive hanwoo specialty restaurants where a serving of 150 g can run in excess of 50,000 won, (ii) restaurants catering to tourists, (iii) large scale cafeterias at lunch time using cheap meat, or (iv) at home.