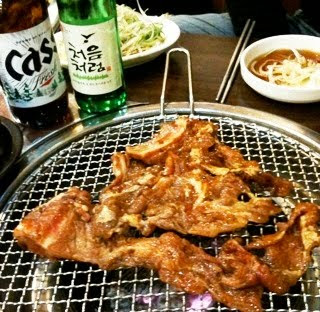 Galbi is a type of Korean BBQ.  It consists of meat, traditionally beef ribs but often pork shoulder, marinated in a sweet sesame-soy sauce and grilled over coals or gas. The term "galbi" literally means "ribs" in Korean but is often synonymous with the dish, though nowadays the more accurate term "yangnyeom (양념) (seasoned) galbi" is becoming quite common.  Although the version presented here is pork, beef galbi is probably more familiar on the international scene.  Pork galbi is relatively cheap at around 8,000-10,000 won per 200-gram serving, pairs well with beer and soju, and allows for slow grilling at the table, so it's a common menu choice for the impromptu midweek dinner-and-drink get-together.

On an unassuming Wednesday evening, with my friend MtG, discussing new iPhone apps, over a plate of pork galbi, the seeds for this blog were sown.  By chance, the name of the restaurant is Bon-Ga (본가), which happens to mean "house" (ga) of "origin" (bon).  Upon discovering the free Project 365 app a few days earlier, MtG had begun to photograph his daily lunches as his theme. For an obsessive-compulsive anal retentive food snob who takes photos of his meals, both at home and elsewhere, for absolutely no reason and to no good end, this was exactly the sort of thing--an actual platform--that would enable the practice. I downloaded the app on the spot and chose dinner as my theme. The blog, featuring in-depth and detailed accounts accompanying the daily photos, would soon follow.