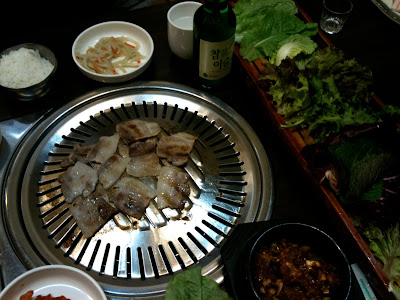 Samgyeopsal, slices of pork belly, is unquestionably the king of barbeque here in Korea. The name comes from the words "sam" (삼), which literally means "three" in Korean; "gyeop" (겹), which means "layer;" and "sal" (살), which means "meat" or (more precisely in this case) "cut of meat." I'm not sure if it's 2 layers of flesh and 1 layer of fat, or the other way around, or if it's even 3 layers exactly. In part, its immense popularity can be attributed to the fact that it's (i) relatively cheap, usually 8,000 won per serving of 200 g in a restaurant, as low as a quarter of that if purchased from a supermarket; (ii) easy to prepare, as it can be cooked on virtually any surface (except directly over open flame due to the flare-ups from the fat); and (iii) well-suited to pairing with a variety of condiments, such as chili pepper paste and sesame oil and salt, as well as side dishes, such as kimchi and mixed greens, according to personal preference. But the primary attraction is that it tastes good: flesh and fat, grilled to a crisp.

Just 5 days in, and already I've repeated a restaurant, the place where the idea for this blog was hatched (see 1.001 Grilled Pork Galbi). On this occasion, accompanied by my wife and 2-yr-old boy Dominic, we ordered the samgyeopsal dinner set for 2, which included 400 g of pork (frozen and imported, which is much cheaper and considered far inferior to fresh and local), a spicy bean paste with seafood as a condiment, a refillable basket of fresh mixed greens as wraps, rice and soup, a steamed egg casserole that my kid loves (one reason why we frequent the place), and of course the omnipresent array of traditional side dishes, like kimchi--all for just 16,000 won total.