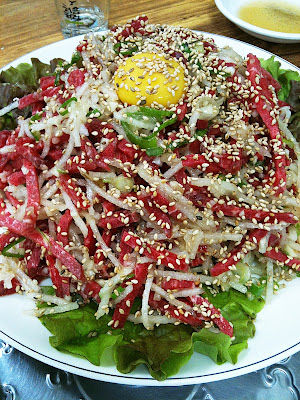 Yuk hoe is a Korean beef dish.  Consists of raw beef, seasoned with sesame oil and a touch of soy sauce, tossed with julienned pear and cucumber, topped with a raw egg yolk.

Never been a fan.

This restaurant, whose yuk hoe has been famous for decades, uses frozen beef. I suppose it was fresh at the time of freezing.  The platter consisted of 500 grams of frozen beef, plus the veggies and egg, all for 30,000 won (compared to 40,000 won for a 150-gram serving of sashimi beef above).