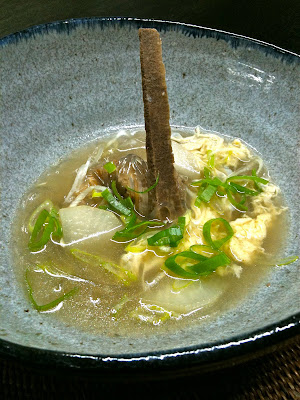 In a series of prior posts, I've discussed various dishes referred to collectively as "tang" (탕). The first of those posts, which describes what constitutes a tang, involved fish (see 1.013 Daegu Maeun Tang). Another post involved chicken (see 1.020 Samgye Tang). Finally, I get around to beef.

Galbi tang (갈비탕) is Korean beef rib soup. Typically using the bits leftover from ribs carved for more glamorous purposes (e.g., barbecue), the meat and bones are first boiled for at least 2 hours to extract maximum flavor, along with various aromatics, such as garlic, leeks, and onions. Some recipes call for even stronger additives, such as ginseng, wood chips, or dried jujubees, though I personally believe that such things overpower the flavor of the beef and suspect that they're employed to mask the flaws of a weak stock. Afterwards, the rendered fat on the surface of the resulting stock may be skimmed off or otherwise removed, especially if the ribs had a high amount of fat content to begin with. The broth is seasoned simply with a touch of soy sauce, salt, and black pepper. Additional ingredients, such as radish, egg ribbons, or glass noodles, may be added just prior to serving, as here, though galbi-tang in its purest form features just the meat and bones and broth, as well as fresh sliced leeks for garnish.

The best galbi-tang offerings are from high-end, large-scale barbecue restaurants, where they have plenty of quality leftover rib bits and proper facilities to boil them down in huge quantities over an extended period of time. Still, it's not that difficult to make at home, at least in theory.