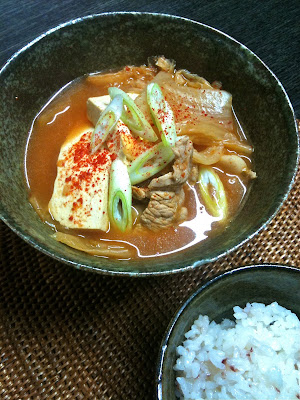 After dropping by the funeral vigil being held for my dissertation advisor's father, an event that I discussed in yesterday's post (see 1.300 Deep-Fried Pork Riblets), I went back my friend's restaurant, where 3 additional camping buddies had converged, having heard that 2 of us had already gathered earlier that evening and, apparently, not wanting to be left out in case something noteworthy happened, like, say, drinking. To make a long story short, I ended up going home with a 10-kg bag of kimchi, the very same kimchi in the kimchi jjigae (김치찌개) served at the restaurant The Kimchi Jjigae (see 1.279 Kimchi Jjigae).

So, for the first meal of the final stretch of Give Me This Day, Cycle 1, 65 meals left to go, I attempted to recreate the dish per the owner's instructions, a process that is totally unlike my own (see 1.027 Kimchi Jjigae, Sauteed Hairtail), seemingly counterintuitive, but infinitely better, maybe the best that I've ever had, albeit with a few personal adjustments.

1. In a pot over high heat, bring the water to the boil.

2. Meanwhile, cut the kimchi [e], pork [f], and tofu into bite-sized pieces and julienne the leek.

5. Remove from the heat, garnish with the red chili powder + leek, season with salt if necessary [g].

[a] This recipe's simplicity, which eliminates the common first step of sauteeing the kimchi in sesame oil to intensify the flavors and thus results in a bright and light and refreshing broth, will only work if the kimchi itself is of the best quality. The restaurant's stock is made by kimchi artisans in some countryside factory for use in stews and other speciality dishes.

[b] My first deviation from the original recipe is the type of pork. Whereas the restaurant uses the fattier (and cheaper) pork shoulder, I used the leaner (and pricier) pork neck, which I happened to have on hand. Because the meat is cooked for just 5 minutes, just enough time for a trace of the pork flavor to permeate into the broth, the fat content is important only as a matter of preference when it's eaten later on. Any cut will do.

[c] It's all about the MSG, something I'd sworn never to use. A mere pinch, maybe half a pinch. I did the before-and-after taste test, two samples just 5 seconds apart, sans MSG and avec. What a difference.  Even if I were squeamish about MSG, the kimchi itself contains MSG anyway.

[d] The red chili powder, though it does contribute a bit of heat, is more for color than taste. The restaurant adds a pinch of ultra-hot green chili powder for extra heat (the kimchi being relatively mild), but I'm not a fan of hot.

[e] As noted in my own recipe, I prefer to remove most of the kimchi fillings, but that's optional. The restaurant doesn't.

[f] The restaurant starts with large chunks of pork that are cut into pieces with scissors just prior to eating.

[g] As with any kimchi jjigae, the ultimate taste depends on the given batch of kimchi, some of which are saltier than others, especially at different stages of fermentation.  This is why it's really impractical to give a recipe for kimchi jjigae with precise measurements--it just takes experience to know how much seasoning is enough.