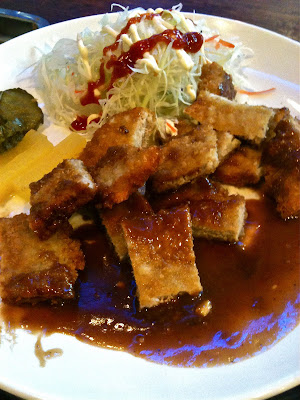 at The Kimchi Jjigae

Tonkatsu is a breaded, deep-fried pork cutlet, Japanese style. The name derives from the Japanese word for pork or pig (ton) and the Japanese pronunciation of the English word "cut" (katsu).

I'm not sure when or where or how the dish came about, but I strongly suspect that it was the result of frequent cultural exchanges between Japan and Germany in the early 20th century (that dynamic duo would eventually accomplish even greater things during the 1940s); one particular item given to Japan by Germany may have been the schnitzel, a dish of breaded, pan-fried meat cutlets, usually veal but also pork (an Austrian dish by origin, but Germany was inclined to appropriate things back in those days). I discussed schnitzel on several occasions in the past (see 1.002 Pork Schnitzel with Garlic Mashed Potatoes for details, and 1.075 Pork Schnitzel with Black Olives in Marinara Sauce for better photo).

The Austrian and Japanese counterparts are essentially the same, though the former has more herbs and spices in the breading, whereas the latter is usually a bit thicker and plain on its own but served with a brown, worchestershire-based sauce. Wikipedia has a decent description (see entry for Tonkatsu), though its sources appear to be as dubious as mine are speculative.

Here in Korea, tonkatsu is now totally mainstream, like Japanese curry or oden (fish cakes), available in every beer bar, corner restaurant, and supermarket. In most cases, the offerings are weak, a sliver of dry meat overfried in a thin, oily breading-like covering. Recently, new specialty restaurants have been making tonkatsu more "authentically" Japanese, with thicker, juicier cuts of pork, and breading that's light and flaky, like tempura.

What I had for dinner this evening falls within the "sliver of dry meat overfried in a thin, oily breading-like covering" category.

It was totally unplanned. In fact, I really shouldn't have been anywhere near it. Just two days earlier, I had eaten dinner with some camping buddies in Sinchon (see 1.300 Deep-Fried Pork Riblets), also an unplanned event. Four days earlier, I had eaten dinner with the same group at a nearby campsite (see 1.298 Barbecued Samgyeopsal), also an unplanned event. A week before that--I could go on for months, but you get the idea. It's like a goddamn cult, not that I don't appreciate their company--I suppose all cult members, by necessity, would have to appreciate each other. I didn't really expect to see them again for awhile--we usually take a long break, say, 3 days, in the middle of the week--but then, goddamn it, MtG announced that he was taking his new, mysterious, though reportedly hot girlfriend to The Kimchi Jjigae (see 1.279 Kimchi Jjigae), the restaurant owned by one of the other members, where we'd all met up 2 days earlier, where I'd obtained the kimchi for my meal just yesterday. I felt obligated despite my better angels to see her while I had the chance. Thus, I shut everything down and ran to The Kimchi Jjigae. Two other members also showed up. The girl, who turned out to be quite hot, apparently had been warned about us, so she appeared to take the cult thing reasonably well.

A-N-Y-W-A-Y, I hadn't had dinner until that point, around 10:30PM, so the owner whipped up a quick plate of his tonkatsu. Not so great, but hard to complain about at 4,000 won, even more so when it's free, as was the booze, as usual. (I was so hungry that I'd cut everything into pieces before remembering to take a photo.)

As I write this in my office at 7PM the following day, wondering what I should eat for dinner today, the call has just come out: they're gathering again at The Kimchi Jjigae. I kid you not. For now, I resist.