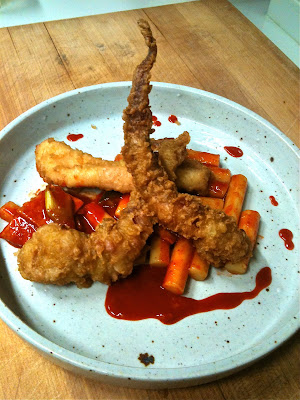 from (unnamed) food cart (near exit 4 of Oksu Station) [takeout]

Twigim (튀김) is a broad category of deep-fried foods, Korean style.  It's very similar to Japanese tempura, but the coating is a bit denser/thicker and not very flaky.  The term literally means "deep-fried."  They're especially popular at food carts on the street, where varieties typically include hashed veggies, sweet potatoes, boiled eggs, and the ubiquitous and most popular squid ("ojingeo (오징어)").  The items are cut into bite-sized pieces and dipped in soy sauce or mixed with ddeokbokki sauce.  Most carts charge around 2,000 won for three of any type, a price that's held for over a decade, though I strongly suspect this will rise everywhere soon enough.  I've always been a bit hesitant about the deep-fried offerings at these tents, which invariably lay out the already fried goodies in piles right along the counter, very rarely covered by anything, right in front of where diners are eating and talking and spraying their spit over the food, right in the open air for flies and dust and all manner of urban contaminants to get right at them.  Granted, the food is re-deep-fried upon order, which would hopefully kill anything unsanitary, but still.

On this occasion, I asked that they leave the squid intact, thinking the whole pieces would make a better photo. The proprietor of the tent looked at me strangely and asked, "How are you going to eat them? They're too big." Not bothering to explain about photographic esthetics, I simply replied, "I have scissors, too." She said, "Well, I'm sure you do, but why would you not want me to cut them for you right now?" This went on for a few more exchanges until I finally mentioned the photo, which then led to another round of communication. In the end, looking at the photo, I'm not sure if it was really worth the trouble.