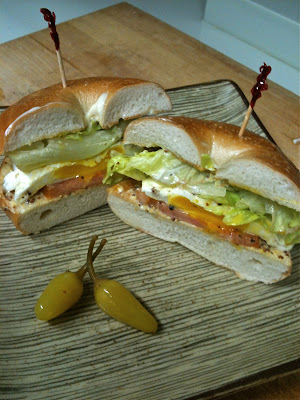 Without question or qualification, my favorite sandwich of all time: fried egg, lettuce and tomato, with mayo and dijon mustard, on a toasted plain bagel. I was introduced to this simplistic marvel during my freshman year at Columbia University in New York City, by one of my fraternity brothers, seated at the counter of a 24-hour diner in front of campus, sometime after midnight, a bit hungry but wary of the typical diner fare.  Sam, the fraternity brother, didn't bother with the menu and instead instructed the server to make this sandwich (the dijon mustard would be my own embellishment/improvement, added a few years later).  Before that moment, I had never seen anyone custom order food that wasn't written on the menu, so already I was impressed.  The sandwich was a revelation.

Incidentally, the diner was Tom's Restaurant, an otherwise unassuming and not particularly appealing establishment that lives as pop culture icon, first by serving as the inspiration for the song, "Tom's Diner," by Suzanne Vega, who attended Barnard College, which is Columbia's sister school and located across the street, and later by its entrance being featured regularly on Seinfeld as the diner where the characters frequently hung out.

The sandwich tonight only rated 4 stars tonight because the tomato wasn't ripe, the lettuce was kinda old, and frankly I'm not that easily impressed anymore.  Looking at the photo, even the colors are off.  At least I got the fried egg just right, with the yolk half cooked and oozing out.  That's important.  I made something similar on 2 previous occasions (see 1.104 Fried Egg and Tomato Sandwich; 1.110 BLT, BFELT Sandwiches), but the first without the crucial lettuce, the second with the unwelcome addition of bacon, and both with ordinary white bread, which isn't really an adequate substitute for the bagel.  Sad that all the elements were in place this time, but their poor quality spoiled the party.

On a totally unrelated note, I stopped by a neighborhood grocery store that specializes in imported goods (a lot of foreign embassies are located in my neighborhood) to get ingredients for a pumpkin pie that I was planning on baking and taking to a gathering tomorrow evening.  No particular reason that it had to be pumpkin pie, except that it's the only thing I know how to bake.  The store was sold out.   The storekeeper looked at me with a regretful face and said, "Well, you can't expect there to be any left by this time. You should've come earlier in the week."  I would imagine that 95% of Koreans have never even heard of pumpkin pie, much less eaten it, so why the hell would there have been a sudden run on pumpkin pie ingred---ahh, it's Thanksgiving weekend in the States.  I really have lost touch with American culture.