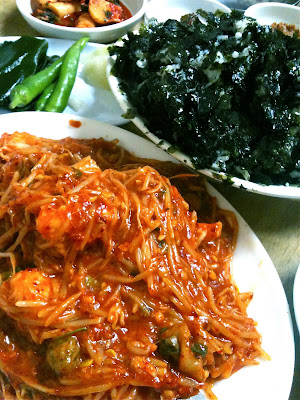 According to legend, the monkfish caught by Korean fisherman in the East Sea were once discarded as being too hideous to eat. (The livers, on the other hand, were harvested and shipped to Japan, where they were and continue to be prized as a delicacy called ankimo (see 1.099 Ankimo)).Until one fateful day, sometime in the mid-1970s, at a time when food in Korea wasn't entirely abundant, an enterprising restaurant owner in the Korean port city of Masan realized it was a shame to waste so much fish and created a dish that didn't showcase the fish as much as it buried the fish under piles of bean sprouts and gobs of spicy sauce. And so it goes, the perhaps apocryphal though much beloved origin story of agu jjim (아구찜).

Looks aside, a creature consisting primarily of a huge mouth with a relatively tiny tapering body, the fish offers little in the way of flesh, mostly rubbery skin and cartilage, though the bits of meat in between are sweet and succulent. The name of the dish simply breaks down to agu, the Korean word for monkfish (agwi (아귀), an alternative spelling, is supposedly the proper spelling and can be commonly seen on signs and menus, though I've never heard anyone pronouncing it as such), and jjim, which literally means "steamed" but often refers to braised dishes or casseroles. A small platter, usually priced at 30,000 won and serving 2, provides about 2-3 pieces of fish per person, mostly rubbery skin and cartilage, of course, and a whole lot of bean sprouts--not exactly cheap, especially for a dish that's one step beyond the refuse pile. After the fish and bean sprouts are consumed, the remaining sauce is often mixed with steamed rice and dried laver to make a kind of fried rice, which some would consider the highlight of the meal.

This place, Busan Jip, serves the best I've ever had. Actually, it's not what they do that sets them ahead of the pack but rather what they don't do, which is that they don't add unnecessary amounts of chili powder in their sauce. It's hot but not fiery, perfectly balanced, allowing for delectation without perspiration. (I maintain that any cook who resorts to intense heat probably does so to overwhelm and therefore distract the diner from the dish's other failings.) It's a hole in the wall, with a capacity of maybe 30 at most. Anytime after 6:30 PM, the crowds will already have amassed, requiring a wait of an hour or more: they mill around the small alley where it's situated, consider the 3 other agu jjim restaurants literally next door on either side (2 to the left, 1 to the right, which are all completely empty), contemplate whether the wait is really worth it, remember with regret that such impatience had once prompted an ill-advised venture into one of those other joints, and conclude that yes it's worth the wait. The restaurant also serves their signature rice balls, as shown in the photo, which they swear is nothing but dried seaweed and steamed rice but must have something else in them, because they're too good to be that simple.