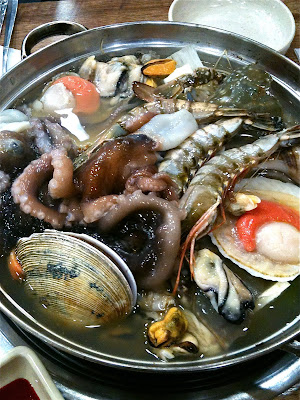 This evening was possibly the happiest day in my kid's life thus far, for 3 reasons.

One, he participated in his first pageant, a holiday-themed affair put on by his nursery school, held in a local community center, on a stage with spotlights, all glitz and pizzazz, complete with costumes and props and balloons and instruments and live music and MCs. Dominic performed in 3 numbers, to thunderous applause and ovation. During the 1st, however, he was somewhat distracted trying to spot us in the auditorium and was visibly crestfallen that he couldn't. At the beginning of the 2nd, when we shouted his name is unison to get his attention, he saw us and grinned and started pouncing up and down like he was possessed, delaying the start of the song until he settled down. Too cute. He played a panda in the 3rd.

Two, Dominic had the most family members in attendance, 8 in all, which made him feel like a star.

And three, for dinner, we went out for his favorite food of all time: octopus. More specifically, he likes a dish called yeonpo tang (연포탕), which I've discussed in 2 previous posts (see 1.194 Yeonpo Tang; 1.207 Octopus Ink Fried Rice). The restaurant, however, located around the corner of the community center, only had various spicy stews with mixed seafood, not yeonpo tang per se, which is mild and thus kid friendly (kid friendly for the odd kid who'd actually eat octopus, that is). They tried their best to accommodate us, but, without their signature recipe, it ended up as a hodge-podge of mixed seafood in a bland stock. Still, it's the part about watching the live octopus squirm to death that Dominic relishes, so he was happy.