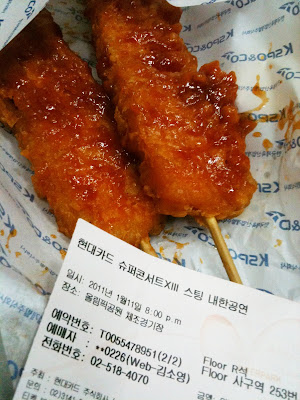 Meat-on-a-stick, prepared in various ways from various types of meat in various kinds of sauce, is a commonly available ready-to-go item at highway rest areas, streetside food tents, and convenience stores throughout Korea. While I'm not averse to the idea--in fact, I like corndogs--I had never thought about trying one of the Korean versions until this evening, when logistical necessity left me with no choice. I'm fairly confident that this so-called "chicken bar" will be my first and last, unless starvation leaves me with no choice.

As part of his Symphonicity tour, Sting performed with the Korean Symphony Orchestra at the Olympic Park Gymnastics Stadium this evening. I rendezvoused with my wife at the venue, just 20 minutes prior to the scheduled start time, leaving us with no time for a proper dinner beforehand. A row of stands outside the stadium sold various foods, but the only things that could be smuggled into the concert hall were these chicken bars and "toast" (i.e., grilled sandwiches filled with egg omelet and ketchup and sugar). We waited until the lights dimmed before extracting the contraband from our pockets. 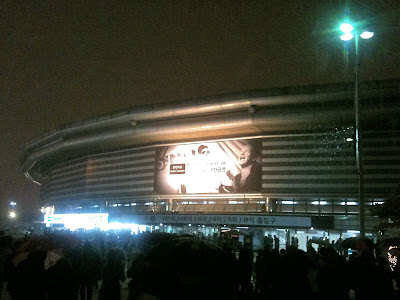 Incidentally, the show was excellent, one of the best Sting concerts that I've seen
--and I've seen 10, including this one.

My wife took the sandwich, and I was left with the meat sticks. I couldn't see what I was eating, but from the taste and texture it seemed to be bits of chicken and breading lumped together and deep-fried and slathered in some spicy ketchup-like sauce. I ate half of one and tossed the rest under my seat. 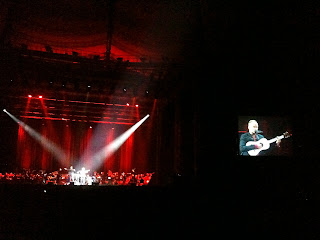 Sting, performing "Roxanne;"
despite what this photo might suggest, we had pretty good seats.