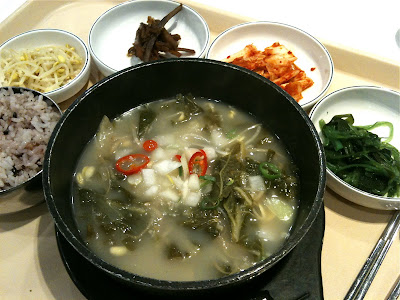 Among the many variations of tang (탕), a category of stock-based soups that I discussed extensively last cycle (see most recently 1.283 Galbi Tang), one popular version is made from sagol (사골), the leg bones of a cow. Whereas boiled ribs (i.e., galbi) produce a stock that's clear in appearance yet rich from the fat of the rib meat, a sagol stock is milky opaque yet crisp in taste. Koreans value sagol stock for its perceived nutritious value.

The menu refers to ugeoji (우거지) as "dried cabbage," but that's only partially correct. In the process of growing cabbage to be made into kimchi, the outer leaves are peeled off and set aside as being too tough/fibrous. These outer leaves are often boiled into a soup, at which point they're soft and rich with flavor. Back in the day, supposedly, poor farmers would sell the heads of cabbage and keep the otherwise unsellable outer leaves for themselves, drying them to preserve them for consumption during the winter months when food was scarce. While this may still hold true in some cases, I'm sure that ugeoji-processing has developed into its own industry.

Anyway, a soup containing ugeoji tends to give off a rustic, humble, down-to-earth vibe, even when the stock is made from expensive beef leg bones. And for some reason, ugeoji soups have come to be regarded as hangover remedies.