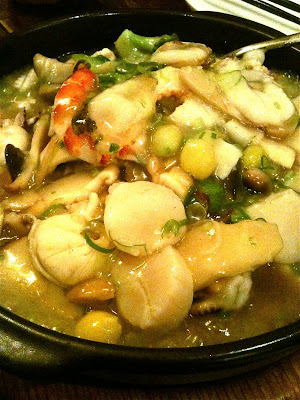 In a post last year, I referred to a certain dish in English as "Happy Family" (see 1.222 Happy Family).  I was mistaken.  That dish, which is called "palbochae (팔보채)" in Korean and means "eight" (pal) treasure (bo) and vegetables (chae)," is a medley of various seafood and vegetables in a slightly spicy garlic sauce.  For 28 years, I had held the erroneous belief that this Korean-Chinese palbochae and American-Chinese Happy Family were the same dish, even though their names aren't anywhere near being similar, and even though they're fundamentally different in composition, the latter consisting almost exclusively of seafood in a non-spicy white sauce.

I can pinpoint the exact moment of inception.  It was September 1983, at the wedding reception of my Aunt Helena (my mother's youngest sister) and her new husband, now Uncle Steve.  It was in San Francisco, at a Chinese restaurant.  During the course of the meal, we were served palbochae.  My dear aunt explained to me that the dish was both a family of expensive ingredients (i.e., "treasures") literally and thus figuratively signified happiness--and hence the name "Happy Family" in English.  To an impressionable 11-year-old, coming from an authority all of 24, the explanation was unimpeachable.

28 years later, during which time the words "happy" and "family" flashed through my mind every time I ate or saw or even thought about palbochae, during which time I must've relayed the same fallacy to others with a similar air of unwarranted smugness on countless occasions, I happened to be at dinner, again at a Chinese restaurant, this time in Korea, with the very same Aunt Helena and Uncle Steve, who are visiting from San Diego, when that long-held misconception was corrected in an instant by a slight glance at the menu.

Jeongabok (전가복), another seafood dish found in Chinese restaurants here in Korea, contains not just seafood but the most pricey varieties, such as abalone, sea cucumber, and scallops. By contrast, palbochae usually includes small shrimp, squid, and clams. For normal folk like me, jeongabok would ordinarily be ordered on special occasions because it's so expensive, often the most expensive regular item on the menu (that is, not counting shark's fin soup or fresh lobster or other seasonal or ultra-exclusive items), typically around 60,000 won, compared to around 30,000 won for pal-bo-chae. We usually don't even dare to look at that part of the menu.

Perhaps for that reason, I never bothered to consider what the name "jeongabok" actually means--until this evening, when my aunt and uncle's visit prompted me to venture into the menu's redlined section for something nice. And for the first time ever, I looked at the Chinese characters beside the name and realized that the name breaks down as "complete" (jeon), "family" (ga), and "fortune" (bok). HAPPY FAMILY.  It all makes sense now. I swear, at that moment of epiphany, it felt like the notion had physically disintegrated in my head by making a poof sound and leaving behind a wisp of smoke.

I hereby issue the first-ever retraction of this blog (though I won't actually go back and alter anything in that misinformed post).

For the record, my aunt now claims never to have equated palbochae with Happy Family.