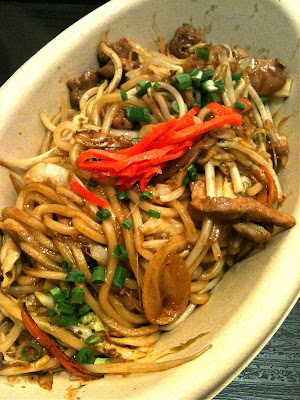 Yakisoba is a Japanese stir-fried noodle dish.  The term simply breaks down into "yaki," which means "fried" (or "stir-fried" really), and "soba," a type of noodle made from buckwheat, even though the dish almost always features flour-based noodles.  Along with the noodles, the dish typically consists of sliced vegetables and meat in a sweet soy/oyster/worcestershire sauce.  It's a common item found in casual Japanese restaurants.  Although I've never made it myself, it seems like one of those dishes that would be difficult to get terribly wrong.

This place managed to get it wrong, terribly, but I won't waste my time going into specifics.

I had my suspicions, given the restaurant's complete emptiness at dinner time, despite its prime location on the main thoroughfare near Apgujeong Station and the CGV movie theater. Opened a couple months ago, it can't help but be noticed by anyone passing by the area, as I do every time I pick up my kid from daycare. Welcoming the addition of a casual Japanese restaurant nearby, which are inexplicably rare in Seoul, I'd been meaning to give it a shot. But wondering what was keeping the customers away, I ordered a single entree to be shared by my kid and me, a trial run based on what seemed to be the safest item on the menu. After one bite, Dominic said he wanted Chicken McNuggets instead.

Incidentally, I was also bothered by their use of disposable service products. The bowl was cardboard/paper. The utensils were plastic. The water, as well as the side dish of pickled radish, came in those plastic cups with the tear-off foil lids, like on airplanes. When I asked for more water, each cup being a tiny 200-ml size, they gave me additional cups. So much waste. I can understand the unfortunate necessity of using disposables in a "fast food" restaurant with high turnover and limited facilities and minimal staff, or on an airplane, or for takeout, but it felt ridiculous under the circumstances.

Moreover, based on the design of the products, I got the impression that it was a marketing gimmick. At another noodle joint that I ran across recently, they served the food in those old-school paper containers once used by Chinese restaurants in the States, even for dine-in customers. When I was in college, I bought Chinese takeout for a visitor from Korea, who was disappointed that the food came in the styrofoam boxes--in fact, she said that the styrofoam defeated the very purpose of the meal, which she had been hoping would recreate the scene in American movies with people eating out of the white containers featuring the red castle printed on the side.