2.116 Suyuk with Chive and Onion Salad 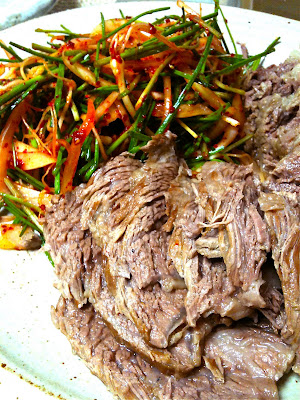 at my parents' home

Suyuk is a Korean beef dish.  It's simply a large piece of beef simmered low and slow in water, sliced thin, and typically served with a soy-based dipping sauce.  The name of the dish means "su (수) = water" + "yuk (육) = meat."  Because it's so simple, the key is to use quality beef, particularly a fibrous cut that tenderizes after prolonged cooking while retaining its structure, such as brisket.  It's a classic example of minimal northern-style cuisine.  In fact, it's really how Koreans used to eat beef, to the extent that they ate beef at all, back in the day before this whole grilling thing ("Korean barbecue") became so popular in recent decades.

Given my parents' northern roots, my mother almost always prepares the dish for family gatherings, especially jesa, knowing that my grandparents would have appreciated it.   She takes it a bit further by adding a salad of chives and onions, which adds both texture and spice.