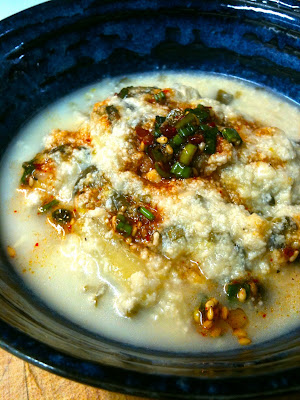 In its most basic form, kong biji jjigae (콩비지찌개) consists of ground soy beans cooked in water. Historically, it was a peasant stew (jjigae) made from the dregs (biji) of soy beans (kong) leftover from making tofu. Modern-day cooks, be they peasant or otherwise, use whole beans. Southern variations often include kimchi and/or pork and/or other ingredients to spice it up, though the Northern tradition keeps it white and simple with soy sauce for seasoning.

I like both, but I'm partial to the white and simple (as here). In a large pot, preferably a thick-bottomed vessel (I use Le Creuset) to avoid caramelizing or burning the sensitive beans during the long cooking process, I start by sweating sliced onions and minced garlic and shredded green cabbage in canola oil until they're soft and wilted. The beans, which are commonly sold in dried form, are reconstituted overnight in water and then blended with (fresh) water into a grainy pulp and added to the pot. Salt and pepper to taste, though it should be left underseasoned if a separate dressing is to be prepared (as here). After about 2 hours on low heat, covered, with frequent stirring, it's done. It can be served as a stand-alone dish (as here) or mixed with steamed rice.