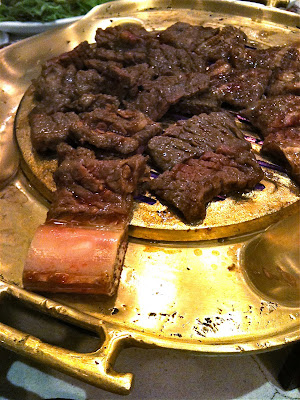 with Wife, Dominic, and Nanny 2

Galbi (갈비) is a type of Korean barbecue.  In its original and complete and purest form, galbi consists of beef short ribs that are butterflied off the bone and marinated in a sweet soy-sesame-garlic marinade and cooked on a grill over coals. The term "galbi" literally means "ribs" but, when used alone without additional qualifiers in a culinary context, it usually means this dish as just described; technically, the long form could be something like "sogogi (beef) yangnyeom (sauce/marinade) (as here) galbi (ribs) gui (grilled)," though nobody would ever refer to it as such.

Like most good Korean barbecue in Korea, galbi is prohibitively expensive due to the astronomical cost of domestic beef, hanwoo (한우).  At Samwon Garden, a landmark restaurant that's on the pricier side, but by no means the priciest, the galbi costs 55,000 won for a 150-gram portion, which includes the bone and the marinade.  Ouch.  Here, we opted for the cheaper American beef galbi at 39,000 won for a 160-gram portion.  Still ouch.  Someday, I should do a blind taste test to see if the extra cost is worth it.

After all, the American beef is quite good as it is.