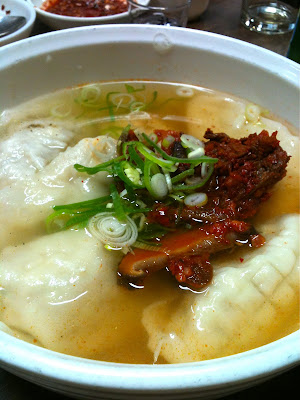 Pil-Dong Myeonok is a landmark Korean restaurant specializing in northern-style cuisine.  Having previously described two other establishments with northerly leanings--Pyeonggaok (평가옥) (see generally 1.067 Mandu Jeongol) and Pyeongyang Myeonok (평양면옥) (see generally 1.286 Mul Naeng-Myeon), the first of which I would recommend, the latter not so much--Pil-Dong Myeonok may be the best of the three.  All the dishes sampled this evening were quite good, albeit a bit southernized.  For example, the mandu themselves were very simple, all white as per northern sensibilities.  But then, the soup was served with a spicy/pungent mushroom and pork topping, very southern in feel--excellent, by the way.  Even the broth was richer/meatier than the typically austere soups of the north.  A great bargain at 9,000 won.  As someone who grew up on northern fare but subsisted predominantly on southern grub outside the home, I found myself liking the stronger flavors. 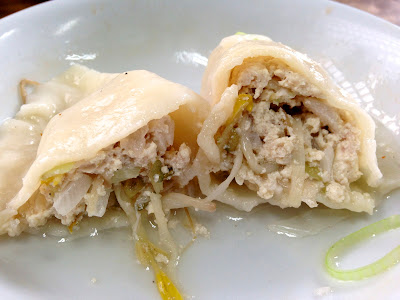 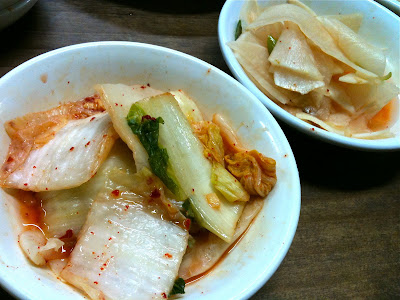 Even the kimchi was white(ish). 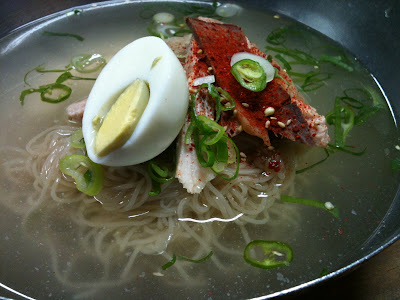 Incidentally, "ok" (옥) is an old Korean suffix meaning "house."  It's not used in the modern vernacular except in reference to homes built along the lines of traditional Korean architecture (i.e., hanok) or to old-school noodle shops (i.e., myeonok).  After 6 decades of separation, anything associated with the north feels old-school, frozen in time, which is why many northern restaurants include "ok" in their names.  Come to think of it, Pil-Dong Myeonok contains the "ok" but not a northern town or region, just the neighborhood where it's located here in Seoul, perhaps suggesting that the food is intended to be something of a compromise. 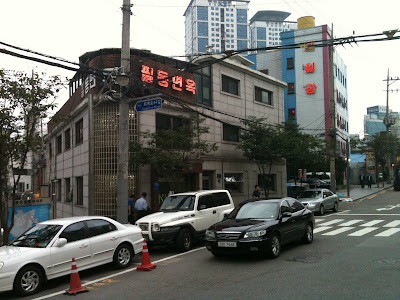 While I would recommend this place for the food, I should warn that the service tends to be rude and abrupt--especially the owner/manager sitting behind the cash register, who's too busy counting the money to look up and say "Thank you."