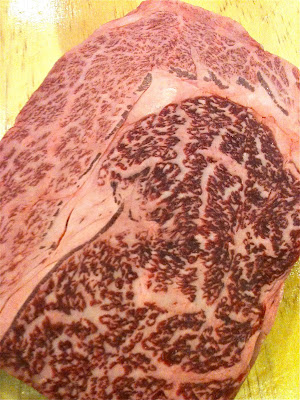 with Wife, Dominic, and my parents

The hazy whiteness of the meat's upper left portion is not an optical illusion due to angle or lighting or focus--it's fat. Marbling at its utterly absurd extreme. One of the main criteria for Korean beef (i.e., hanwoo (한우)) to receive the highest 1++ rating is the fat content, the higher the better. Just by appearance, I'd estimate at least 80% fat, if not more.

Generally, Koreans value the fattier cuts of meat. The most popular part of the pig, for example, is the pork belly (samgyeopsal (삼겹살)) (see generally 2.079 Grilled Ogyeopsal). When it comes to chicken, dark meat is overwhelmingly preferred over white meat, which Koreans tend to dread as a tasteless diet option, the way Americans regard tofu or rice crackers. As for beef, the ribeye (deungsim (등심)) reigns supreme; when it's this marbled, the meat earns the additional monicker "ggot" (꽃), which means "flower" and refers to its speckled appearance. Along the same lines as their distaste for chicken breast, Koreans can't fathom why the filet mignon is so prized in the West.

Among the many reasons behind this preference for fat, specifically with respect to beef, one key factor that applies to a large segment of the beef-eating population, if not the vast majority, is the practice of cooking the meat well-done. Many Koreans consider the natural juices in the meat to be blood, which in turn is considered disagreeable at best and gross/unsafe/inedible at worst. This used to drive me self-righteously insane when I would prepare steaks for guests at home, taking the utmost care to sear the meat and seal in the juices and cook it to a perfect medium rare and let it rest, only to face indignant recall demands because of unacceptable moisture; I no longer do steaks for others. Left to their own devices, as they often are at do-it-yourself barbecue restaurants, they turn the meat over and over and press down on it until every last drop of liquid has been squeezed out and sizzled away on the pan, and they're left with a perfectly brown and dry and overcooked piece of jerky. In such cases, some fat wouldn't hurt.

As discussed in a recent post, top-grade Korean beef is exorbitantly expensive though marginally cheaper at hybrid butcher shop/restaurants as was the case here (see 2.190 Grilled Beef Brisket). The portion shown in the photo weighed exactly 170 grams and cost 34,000 won, which is relatively cheap by local standards, some places charging more than 50,000 won for 125 grams.

While I wouldn't say that any piece of beef is worth that high a price, it's certainly a carnivorous experience unlike any other.