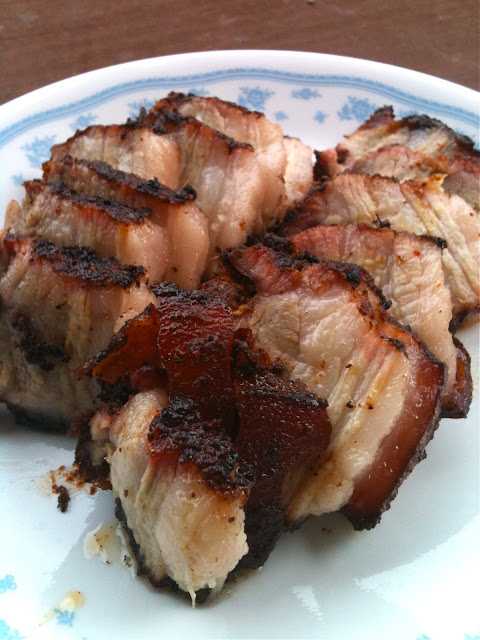 at my uncle's cabin

with Wife, Mom and Dad, and employees from my father's company

The first dish by my own hand that I've felt worthy of 4.0. I got the idea from MtG, who occasionally makes something like it when we go car camping (see 1.193 BBQ Pork Bellies).  It's essentially BBQ dry-rub via the indirect grilling method in a closed kettle grill.  I'm naming the dish in MtG's honor, whose real name is Geum San (금산), which literally means "Gold Mountain," so all of his internet aliases and logins comprise some form of GoldMt or MtGold. 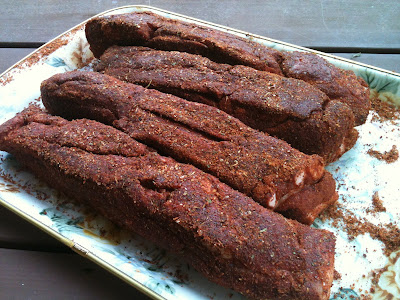 Four super pork belly fillets (ogyeopsal), each weighing about 800 g; standard pork bellies cut to the same thickness would weigh about 500 g each.

I don't know specifically what goes into his dry-rub mix, but I suspect the foundation is similar: a combination of salt, pepper, sugar, chili powder, cumin, garlic powder, thyme, oregano, etc. I also added some "cajun spice mix" (from Costco), "dry-rub mix" (from Goode's BBQ), which are pretty much more of the same but with MSG for good measure, as well as powders of cayenne, coriander, ginger, paprika, celery, and onion. I've never bothered to measure out the amounts, but it always turns out more-or-less the same. Someday, I'll attempt to nail down a recipe. The key is the temperature inside the grill, starting at around 300 degrees centigrade and gradually dying down to about 150 degrees after 1 hour, which is maintained for another 1 hour. The heat is set initially by balancing the number of coals with the amount of meat and adjusting when necessary through the opening/closing of the air vents. Extreme cold or hot weather can be a major factor. Under the grill, between the coals set to either side, a pan of water adds steamed vapor to the environment and keeps the meat from drying out. MtG tosses in a few wood chips into the pan to add smoke, but I prefer the cleaner flavor without. After 2 hours, relatively free of fuss, a big pile of meat is ready to go, a good way to feed a lot of people at once. 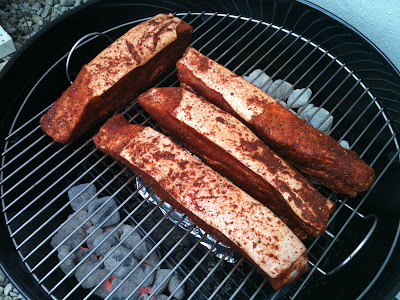 Coals are added when white hot; meat is arranged so as not to be directly above the coals.

As for the type of meat, MtG and I agree that pork bellies are ideal. A lot of the fat drips off during the cooking while moisturizing the flesh in the process. Another benefit of having so much fat is that overcooking isn't a concern, as can be the case with chicken or ribs; leaving the pork bellies in the grill until they need to be served, even for another hour or so, so long as they don't burn, they stay juicy. MtG prefers to rest the meat wrapped in foil for about 30 minutes to firm up the flesh/fat and make them easier to slice/serve; indeed, they can be eaten hours later at room temperature, at which point they have the taste and texture of ham, especially when they've been smoked. I prefer to serve them after about only 10 minutes of resting, just enough to allow the juices to be reabsorbed, at which point the flesh/fat is soft on the inside and crispy on the outside, albeit a bit crumbly throughout. 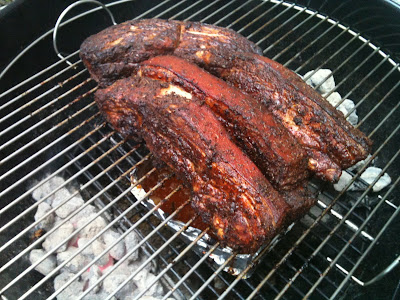 A bit of charred caramelization is to be expected and ultimately contributes to the taste and texture.

On this occasion, a company retreat for my father's employees, my mother had enlisted me as grill master and purchased the meat under my direction. However, instead of standard pork bellies, she bought the super pork bellies known here as "ogyeopsal" (오겹살), which have an extra layer of fat and the skin (see generally 2.079 Grilled Ogyeopsal). I'm not a big fan of pork skin, but it added an interesting textural dimension to the finished product, a dense gumminess that everyone else seemed to enjoy. 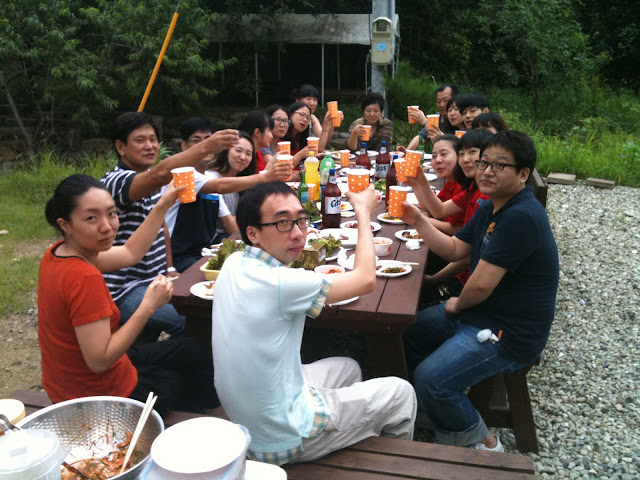