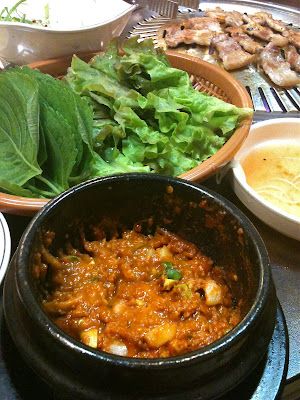 with Wife, Dominic, and Nanny 2


One of the most common items on a Korean table, especially involving Korean BBQ, such as unmarinated samgyeopsal (삼겹살) (pork belly), particularly in a restaurant, is the condiment ssamjang (쌈장). It's primarily doenjang (된장), a fermented bean paste similar to Japanese miso, but with red chili paste (gochujang (고추장)) and chili powder and garlic and sesame oil and sugar and other seasonings to give it a spicy savory sweetness. As the name implies, it's intended to be a sauce (jang) that accompanies lettuce or other vegetable wraps (ssam). A piece of samgyeopsal + a dab of ssamjang + a leaf of ssam = harmony.

At our favorite local restaurant, the ssamjang also includes bits of seafood (haemul (해물)), such as squid, which adds extra layers of flavor and texture.

Tonight was the 3rd going-away party for our current nanny (Nanny 2), who's been with us on and off for the past 4 years, more than all the others combined. For her 2nd going-away party, the subject of a previous post (see 1.114 Grilled Ribeye), we tried to take her to an expensive restaurant only to see that she wouldn't eat anything except free soup because the food was so expensive. This time, we played it safe by going to our much more affordable neighborhood joint only to discover as we were leaving that she had already paid for the meal while we weren't watching. Oh the games she plays.

What with Dominic practically a teenager now, or at least he acts like one, we've decided not to hire a new nanny. Thankfully, Nanny 2 will still drop by twice a week to help with the chores.