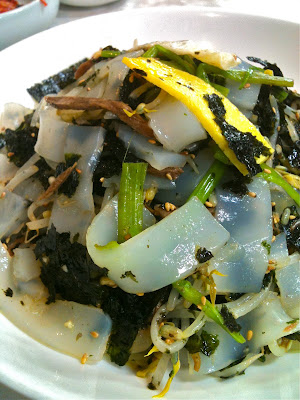 In Korean cuisine, muk (묵) is a kind of gelatinous cake made from the starch of a bean or nut.   The taste and texture vary widely depending on the specific bean or nut used.  One of the most common varieties is cheongpo-muk (청포묵) made from green lentils.  It doesn't really taste like anything and has a smooth, slightly chewy texture somewhat similar to rice noodles.

Whereas the methods of serving muk are also varied, the dish tangpyeong-chae (탕평채) consists of cheongpo-muk along with bean sprouts, shredded beef, and laver tossed in a light sesame-soy dressing.    The name of the dish "tangpyeong," deriving from an archaic term relating to political reconciliation, symbolizes the notion that it was served to warring factions at the negotiation table; "chae" generally refers to a mixed/tossed dish with sliced components.  Here, the muk is sliced wide, though usually it's sliced into thinner strips.  Also, the restaurant adds a touch of vinegar or some kind of acid to the dressing, giving it a nice tangy kick.  18,000 won--not cheap but worth it.

Another fine example of the consistently good eats at this restaurant, which I reviewed glowingly last month (see 2.248 Mandu Jeon-Gol).