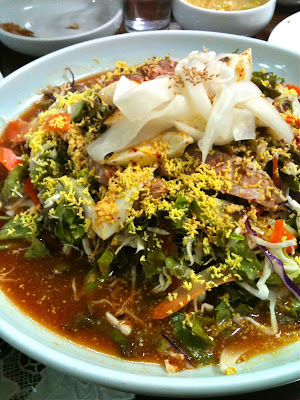 with Wife, Dominic, Lisa and Becca

This is a LANDMARK EATERY (see generally posts on landmark eats).

Jaengban guksu (쟁반국수) is a Korean noodle dish. Literally, it consists of noodles ("guksu") served on a dish ("jaengban," which more accurately = "tray/platter").  It's essentially the same thing as mak guksu (막국수) (see generally 2.157 Mak Guksu)--buckwheat noodles in a chilled fish or meat broth, seasoned with sesame oil and gochujang (고추장) (red chili paste)--but larger in scale and more complicated with numerous additional ingredients, such as sliced pork and pickled radish and shredded cabbage and carrots and cucumbers and bell peppers and onions, maybe even a boiled egg.  Here, the the dish cost 18,000 won for an order of 2. 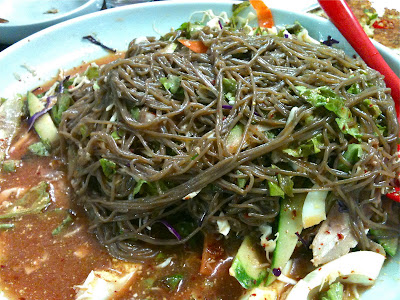 The buckwheat noodles underneath the fancy presentation.

Sadly, I was disappointed not only with the noodles but also with the other dishes that we ordered this evening.   Counting this restaurant as one of my all-time favorite establishments in the city, I'd given a 6-star rating to their bossam (보쌈), more specifically to their dried radish side dish mumalaengi (무말랭이) (see 1.347 Bossam with Mumalaengi and Mixed Green Wraps), but even that didn't seem to be up to their usual standards. A close-up of the mumalaengi, although they didn't seem to be as good as usual.

Maybe I was overly sensitive due to the presence of Lisa, the blog's "number one fan." I wasn't under any obligation to treat her to the best, and I hadn't promised her any such thing, and she didn't demand it, and the choice of this particular venue was something of a last minute decision, but I felt a responsibility nonetheless. 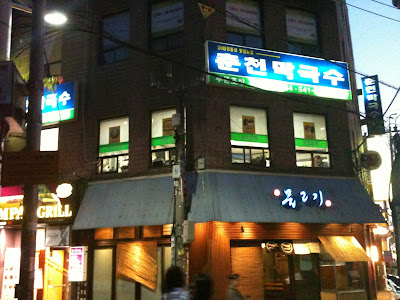