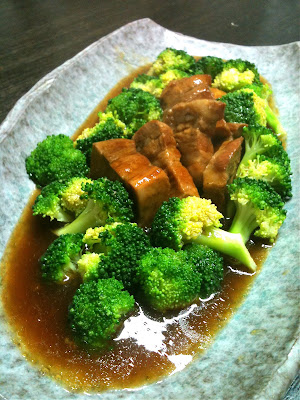 Dongpo pork is a Chinese dish.  In its original form, consists of pork belly braised for several hours on low heat in soy sauce and rice wine, seasoned with 5-spice and/or other fragrant herbs used in northern and eastern China. According to legend, it originated by happy accident during the 11th century in the city of Hangzhou, when Su Dongpo, a renaissance man reputed to be one of China's original gourmandd, was simply stewing pork but left the pot on the stove for too long.

At Chinese restaurants in Korea, where the dish is called "dongpa yuk" (동파육), the "yuk" meaning "meat," the pork is often first deep-fried to quicken the cooking process and dressed in the soy-sesame-oyster sauce ubiquitous to Korean-Chinese cuisine, along with a touch of star anise (one component of 5-spice) to give it a whiff of authenticity.

This was my first attempt. I was inspired by a recent acquisition of 5-spice (thanks Lisa!) but otherwise employed the Koreanized method out of convenience. Despite the deep-frying, the meat came out a bit dry. I also failed to thicken the sauce sufficiently. But it tasted okay, I guess.