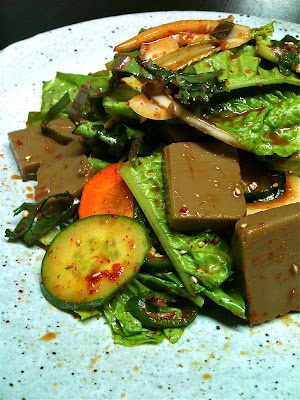 Made from acorns, this is the most common type of muk (묵), a gelatinous cake of various types that I described in a previous post (see 2.271 Tangpyeong-Chae).   In Korean, acorns are called "dotori" (도토리).  While some enterprising Koreans are certain to have formulated other ways to eat acorns, this is the only one that I've ever seen.  The muk is wiggly yet crumbly with a nutty, slightly bitter taste (sorry, but that's the best description that I could muster).  Typically, it's cut into bite-sized pieces and dressed in a spicy soy sauce along with raw vegetables, such as cucumbers, carrots, and various greens; "muchim" refers generally to the tossing of ingredients and seasonings into a salad-like mix, as here. 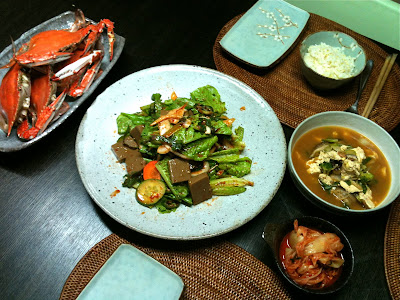 This dish always reminds me.  When I was growing up in California, a gigantic oak tree stood along the main road running through the suburb where we lived.  For the first month of the 4th grade, when we were finally allowed to ride our bikes to school and back, prior to the realization that taking the school bus made everything so much easier, independence be damned, my friends and I would pedal past the tree in the morning and later again in the afternoon.  On the way home one day, we were approaching the tree from about half a mile away, when I spotted a small person crouching on the ground below the tree.  Immediately, I knew that it was my grandmother, my mother's mother, who was visiting from Korea and staying with us.  She was scrounging acorns to make dotori muk.  I'd seen her elsewhere on other occasions, with a ratty paper grocery bag, in broad daylight, on the cadge for stray walnuts or persimmons or whatever nuts or fruits that had been left to rot by the people and squirrels of the neighborhood.  I'd implored her to stop, for the sake of my personal reputation, our family's good name, and the dignity of the Korean nation.  But she couldn't resist, of course, not one to let perfectly good food go to waste.  Looking back, we were both right.  The best compromise would've been for her to do it at night, ninja style, with me on the lookout.  Anyway, getting back to the old woman picking up acorns on the side of the road, I was about to suggest a detour to my friends, but too late; one of them said, "Hey, isn't that your grandma?  That bag looks heavy.  You should carry it home for her."  In college, in a class on Asian-American studies, I wrote about this incident for a paper concerning culture clash.