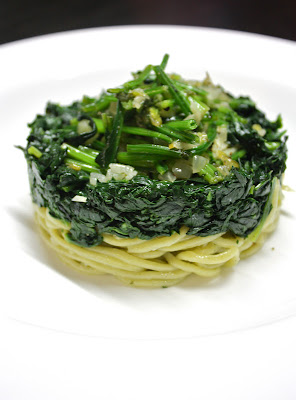 
Though disappointed by the outcome of the pasta farrago a few days ago (see 3.144 Linguine con Spinaci with Shrimp Scampi & Puree d'Epinards Simple in Tomato-Parmesan-Olive Sauce), I was confident that simplifying the concept could make it work.  This time, I separated the spinach, blanching-squeezing-sauteeing the leaves a la Julia Child as before, while stir-frying the stems in olive oil and white wine with garlic and herbs scampi style.  By coincidence, on yesterday's trip to E-Mart, I'd discovered a new product line from the store's private label: packaged fresh spaghetti, including regular, squid ink, and this spinach variety.  With three distinct tastes and textures of spinach, plus the final drops of dark juice squeezed from the leaves, and no shrimp or tomatoes or olives to get in the way, the dish was focused and intense. 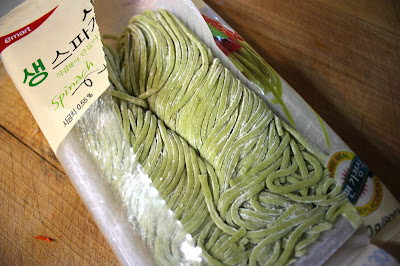 One problem was that it was a bit dry, which I may correct next time by making a light sauce out of spinach stock (e.g., the juice squeezed from the leaves).

Also, it now occurs to me that I should've started with the leaves on the bottom, followed by the pasta, and topped with the stems to better show the separate layers.
No comments: Links to this post 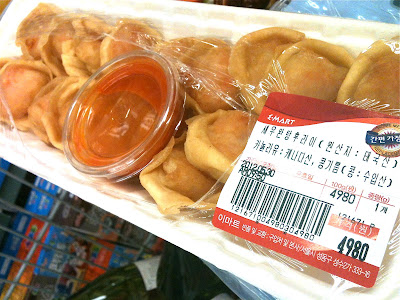 A new item at E-Mart.  They weren't very good.  Worse, when I was done, my stomach immediately started grumbling, which made me realize that eating 20 deep-fried shrimp, cold, at one time, was a bad idea.
No comments: Links to this post 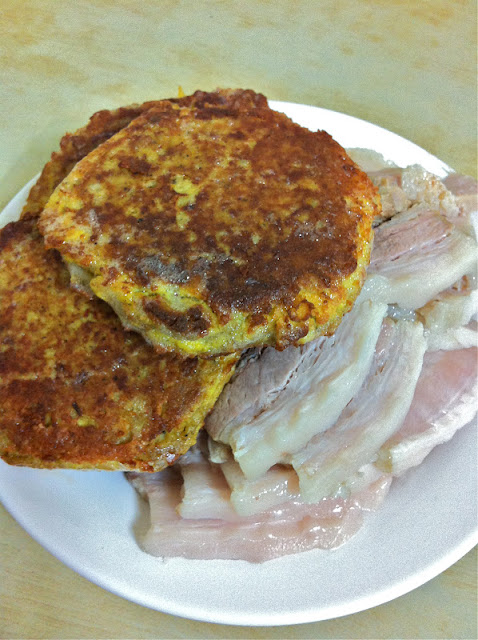 In the town of Okcheon, in every single restaurant serving the regional brand of mul naeng myeon (MNM) (see 3.005 Mul Naeng Myeon), the menu also offers this pork duo platter.  The two items are usually listed as separate dishes, but smaller parties may request half orders of each; the term "ban-ban (반반)" just means "half-half."

One half comprises wanja, a dish described in a prior post on Okcheon (see 1.261 Wanja). 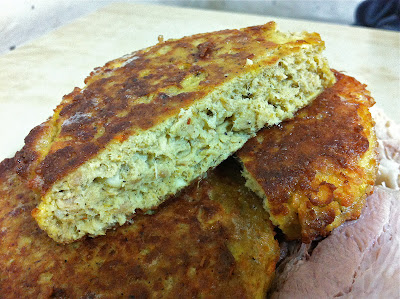 The other half comprises pyeonyuk (편육), another classic Korean pork dish.  Perhaps the simplest dish of all, it consists of pork, often pork belly (as here), boiled whole, usually in water seasoned in some way, sliced, and served with a simple dipping sauce, such as soy sauce or fermented shrimp paste.  Northern in origin, pyeonyuk is a staple item at most northern-style restaurants throughout the south (see for example 2.201 Mandu Guk).  Because it's so naked, as northern fare tends to be, the meat must be fresh and top quality.  To kill/mask any lingering off-flavors, some restaurants add a trick ingredient to the boiling water, such as doenjang or ginger or ginseng or slivers of oak or some combination thereof, though too much would overwhelm the delicate porcine character and defeat the purpose of the dish.

At Okcheon Goeup Naeng Myeon, my favorite restaurant in the area, the pork platter is nonpareil.  The wanja is perfectly seasoned and balanced, perfectly juicy and crispy and chewy.  The pyeonyuk  is perfectly pure, perfectly pristine, perfectly porky.  It does not get any better than this.  And at 13,000 won for the platter, a major bargain.

Lately, I've been shuttling back and forth from Seoul to Hoengseong, where construction on our ("our" = "my parents'") cabin is nearing completion.  The trip, exactly 99.8 km door-to-door, takes me through Okcheon.  Today was the wife's first visit to the site. 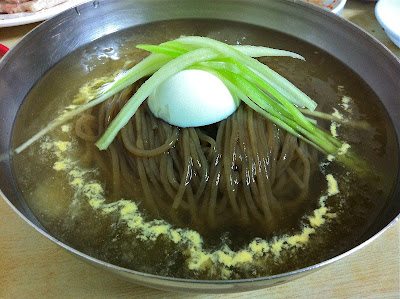 I've come to the conclusion that this MNM, recently given a 3.5 rating, also embodies perfection and thus deserves 4.0, though the wife insists that it's barely worth 2.0.
No comments: Links to this post 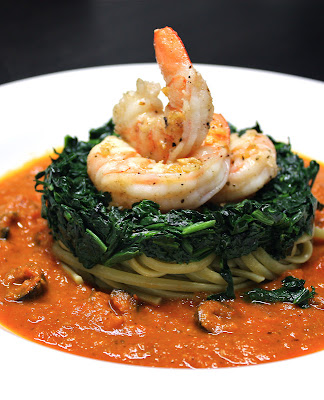 The stacking, a first for me, was accomplished via one of the toys that I recently acquired at City'Super in Hong Kong (see 3.140 Noodles with Shrimp and Squash).  Originally intending this to be a simpler dish consisting of spaghetti with shrimp in tomato sauce, I decided at the last minute to add the spinach, as well as the spinach-infused linguine, just to see if everything would stack up; it did, though the pasta needed to dry out a bit before holding its shape.  Unfortunately, the dish overall ended up a mess: too much going on without any harmony. 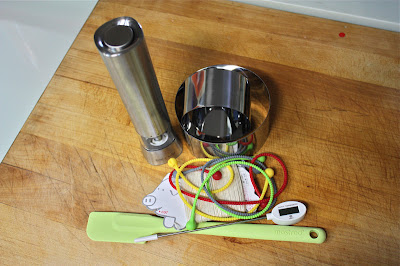 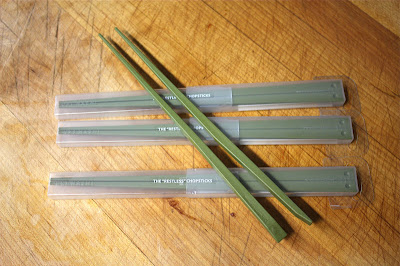 The "Restless" Chopsticks (in olive green), so called because they're cut an angle on one side that keeps the tips from touching the surface of the table when set down, though the asymmetry requires them to be held just right when in use (I just bought them for the color). 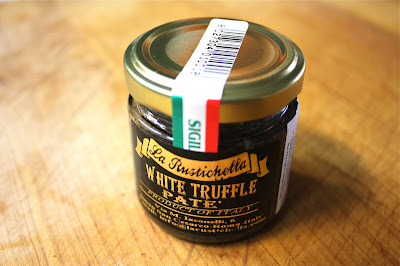 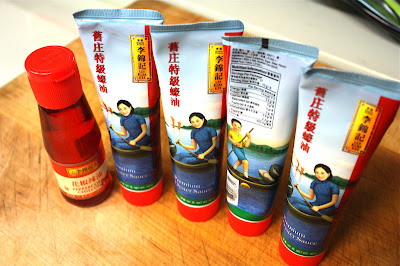 Finally, Lee Kum Kee discovers plastic, at least for oyster sauce
(I remember the brouhaha when Heinz made the switch back in the 80s);
I love that the company has embraced/magnified the communist campiness of its packaging. 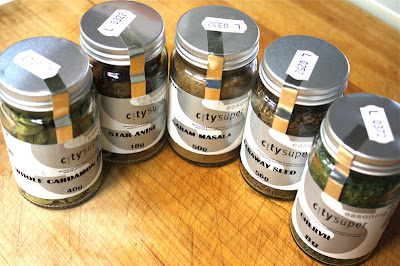 whole cardamom pods, star anise, garam masala, caraway seed, chervil
(I have no idea how to use any of these) 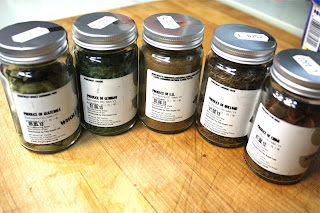 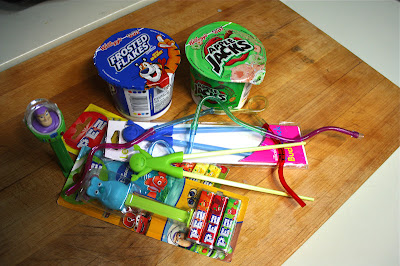 The first spinach recipe below is from Julia Child's Mastering the Art of French Cooking. Could French cooking be any simpler?. 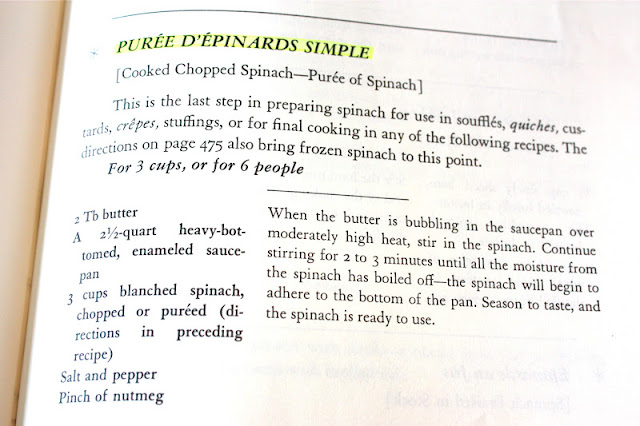 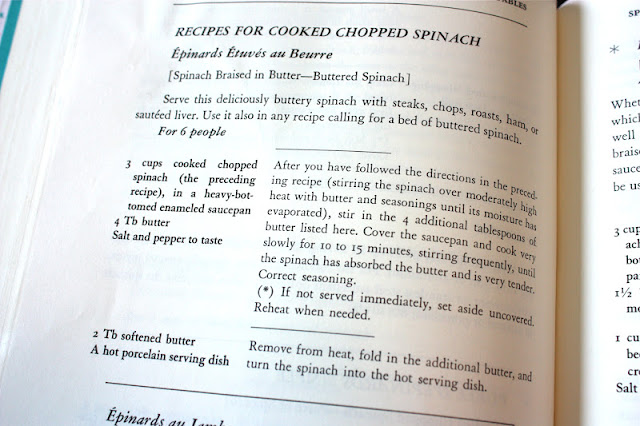 I love how the "puree of spinach"(above) differs from the "braised spinach" (below)
only by the addition of 4 tablespoons and then another 2 tablespoons of butter.
3 comments: Links to this post 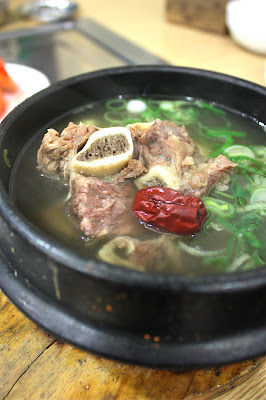 While this dish has been featured on several prior posts (see most recently 2.204 Galbi Tang), this is the first time from a restaurant.

This restaurant has also been featured before (see 2.328 Seolleong Tang), though it's undergone a few changes since then.  Notably, they've done away with most of the barbecue, which isn't really what people come for.  The soups, which are what people come for, seemed the same as before. However, the prices went up at least 1,000 won across the board, making the galbi tang now 11,000 won with regular rice (12,000 won with special multi-grain rice in a stone bowl).  They've kept the self-serve ice cream, which is what Dominic comes for. 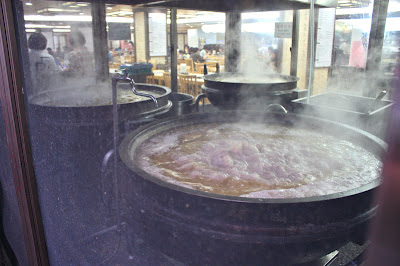 These three gigantic cauldrons, proudly on display through the front window,
seemingly 24-hours a day, boil away beef bones for soups. 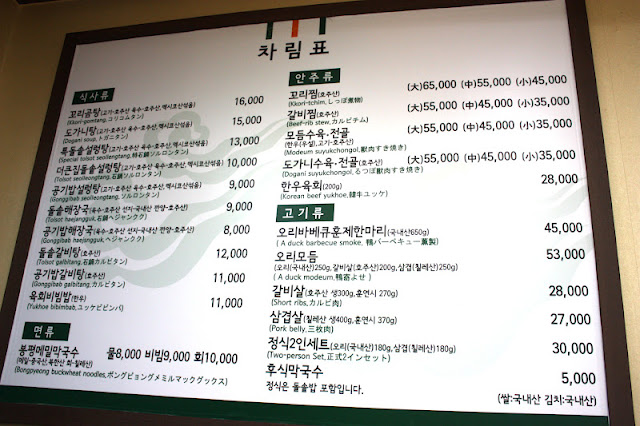 For some reason, they've added duck to the menu:
"A duck barbecue smoke." 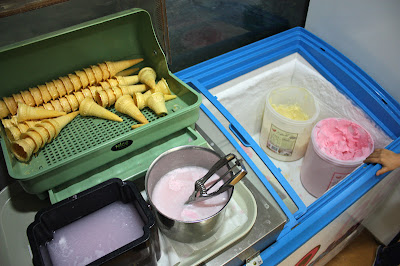 Now that I think about it, this is probably a bad idea on so many levels. 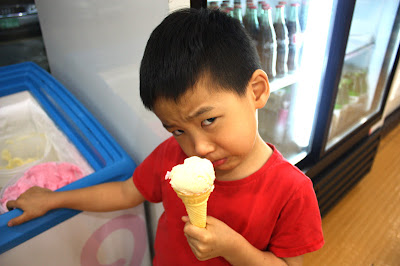 I suppose this restaurant will have to be blacklisted, if only to save my kid from the ice cream.

I have to admit that four consecutive days of nothing but Cantonese, as much as I adore it, was too much of a good thing.  By welcome contrast, Korean comfort food never tasted better, never felt more nourishing, than it did this evening.  I haven't ordered a second bowl of rice at a restaurant since college. 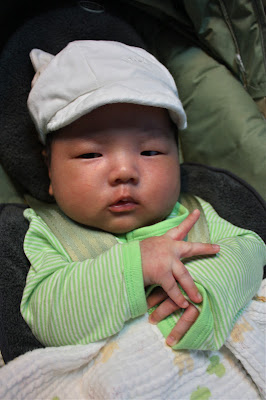