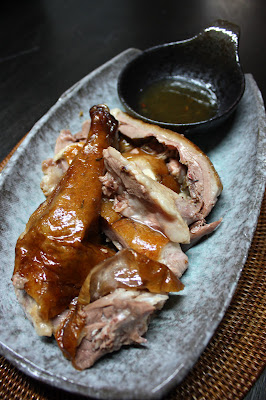 The Extend-the-Gastronomic-Experience system, beta-tested on my prior trip to Hong Kong, was now perfect with one additional improvement. Previously, I'd purchased a roast duck from the food court in the airport and taken it back with me on the flight home, shoving the package into my carryon and stowed in the overhead compartment (see 2.333 Roast Duck).  The only problem was, four hours later, upon opening the bin upon arrival--POW!--anatidae miasma, which followed me through immigration, customs, and on the bus ride home, surely with dark cartoon clouds of stink floating over me all the while.  Whereas the aroma of roast duck and other siu mei generally permeates the very air of Hong Kong everywhere, it seemed intensified in the Korean environment; the same thing happened when I took kimchi to Geneva.  Anyway, this time, I had zip-lock bags to eliminate the fetor issue. 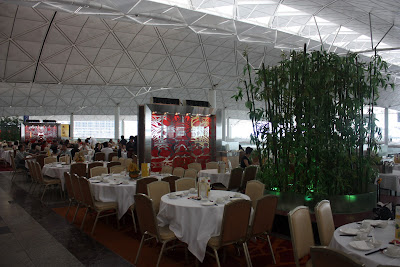 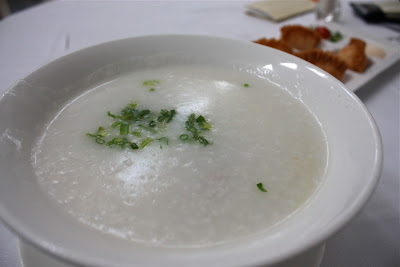 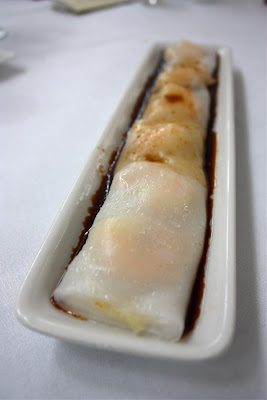 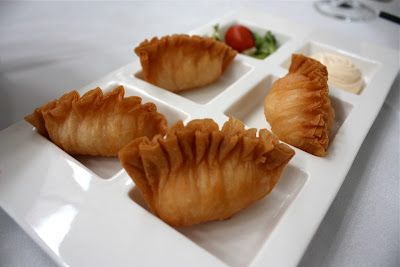 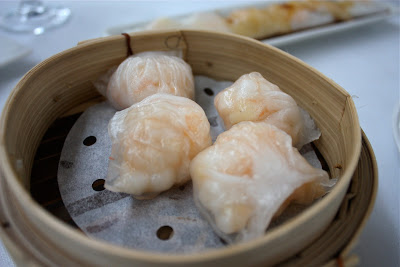 Alas, the plan was thwarted by alternative intentions.  Getting to the airport well ahead of our scheduled afternoon departure, the professors settled in for brunch at Maxim's, a renowned chain restaurant with a branch in the terminal.  The dim sum and congee, by the way, were beyond reproach. Signs throughout the establishment advertised roast goose to go, conveniently boxed for easy transport. HK$420 (about 63,000 won) for a whole, HK$210 for a half.  With the "flying roast goose" from last night still fresh in mind (see 3.141 Flying Roast Goose), the other professors were eager to take home food souvenirs of their own.  The server warned that the bird, whole or half, wouldn't come chopped; chopped, the juices would leak from the box (no zip-lock bag).  As such, it didn't seem like a great idea to me.  Ideally, each piece of roast goose/duck requires a layered balance of skin-fat-flesh.  Chefs preparing siu mei use razor sharp cleavers to chop with precision straight down through the body, piece by piece, to achieve that balance.  Knowing a thing or two about knife work, I knew that chopping the goose in that manner at home would be nearly impossible, even for me.  The others, knowing nothing about knife work, were of the "how hard could it be?" opinion.  I didn't argue the point. 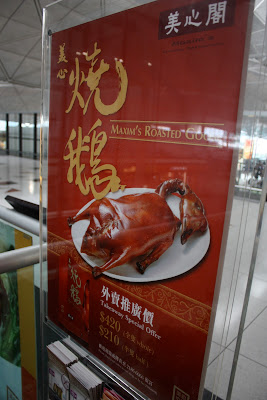 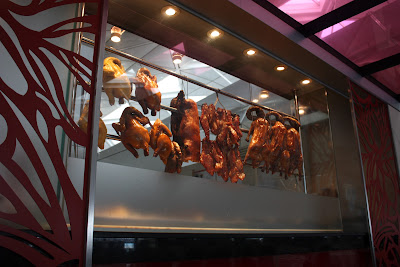 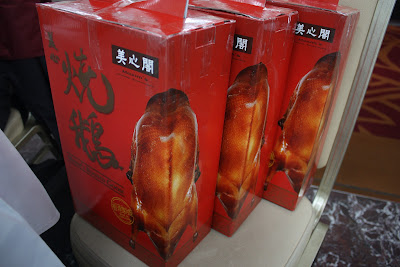 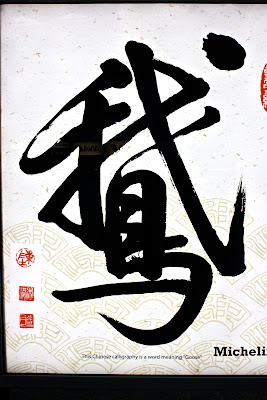 Once we got the boxes of goose at our table, my colleagues immediately started regretting the decision, but for a different reason.  Isn't it illegal to take food into the country?  They wouldn't sell it if it were illegal, right?  The Chinese will do anything for a quick buck.  And it's not like the customer can go back for a refund.  When we were getting our boarding passes at the checkin counter, the airline rep saw the boxes, frowned, and mentioned hearing about hams confiscated by customs.  That put everyone in jitters.  I had to explain that customs in most countries prohibits raw fruits, vegetables, and meats, including certain types of air-dried hams, such as jamon or prosciutto, that aren't technically cooked.   Roast goose would be fine, as would a bucket of KFC.  Just for fun, I told them that my mother got busted while attempting to bring uncooked sundae into the States, for me, while I was in college, which earned her a black flag in her passport, forcing her to undergo inspection every time that she entered the country during the next few years.  While the goose box fit in my backpack, the others scrambled to buy cookies and cakes in the duty free store just to get big bags for purposes of subterfuge.  When our flight was delayed, one professor broke down under the mounting pressure and started clawing at his box, insisting that we consume the contraband right then and there before we all got caught and branded as smugglers.  When we landed, with the smell that I mentioned above, oh man, the panic that ensued.  Fortunately, we all made it through okay. 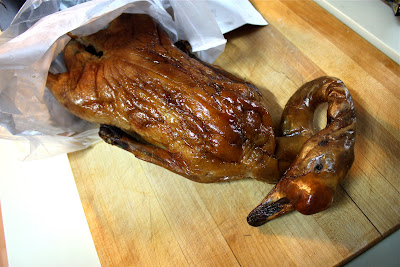 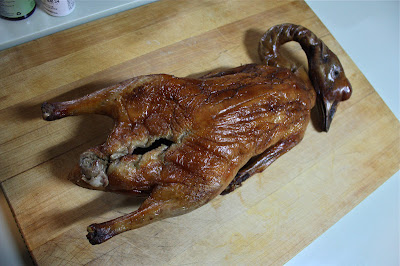 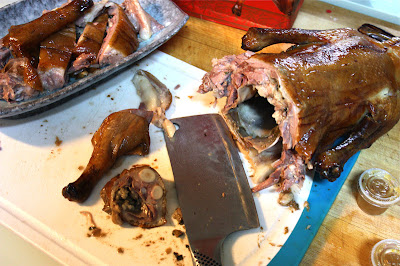 At home, however, it was just as I'd anticipated.  The carnage was spectacular.  With every whack of the knife, a standard meat cleaver that smashed more than chopped, bits of skin and fat and flesh flew everywhere.  The resulting mess wasn't so appetizing.  I can't imagine how the other professors fared.