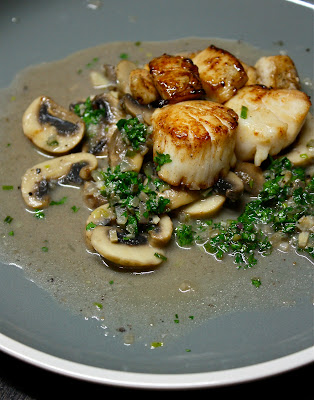 
While I've pan-seared scallops before and used the juices as the basis for a butter-enhanced sauce (see 2.154 Pan-Seared Scallops and Chicory Leaves in a Butter-Gin Reduction), the technique of incorporating shallots to the mix, plus maybe scallions and garlic, as here, and finishing with parsley is relatively new to me (see 3.153 Biftek Saute Bercy with Pommes de Terre Sautees en Des), though I can no longer imagine doing it any other way.

Very very close to perfection.  It just needed a bit more of ... something. Perhaps with pasta, Antarctica-style, it could've been 6 stars.
No comments: Links to this post 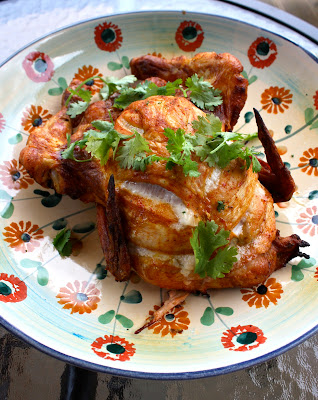 
Talk about bogus classification. In the six-part series Jamie's Great Britain, which has the chef traveling around the country to highlight various local delicacies, he stops by the town of Aston with a whopping Indian/Pakistani population of nearly 80%, inspiring him to make a tandoori-style roast chicken from the mobile kitchen in the back of his truck.  He then calls the dish "quintessentially British" by virtue of "the Empire," reasoning that the colonial rulers had brought the food from South Asia back home, where the masses were quick to adopt it as their own.  Thus, the ubiquity of curry in mainstream venues throughout Britain.  That seems quite a positive spin on what was essentially cultural pillaging for almost two centuries of imperial dominion.

In any case, I tried to replicate the recipe but to limited success.  The ingredients for the marinade included garlic, ginger, chili, cilantro, lemon juice, yoghurt, garam masala, cumin, tumeric, salt, pepper.  At this point, the marinade itself seemed legit; I was amazed at how "Indian" it tasted. After scoring the chicken and rubbing the marinade all over, the bird was placed in a barbecue kettle set up for indirect grilling.  Unfortunately, the heat level was too low, resulting in a slightly undercooked and dried out chicken.   Also, it was underseasoned.  Correcting for such errors, however, I anticipate that this could become one of my standard barbecue dishes. 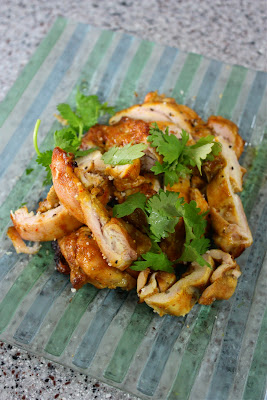 I also tried the marinade on chicken thighs,
which turned out better with an extra sprinkling of salt.
No comments: Links to this post 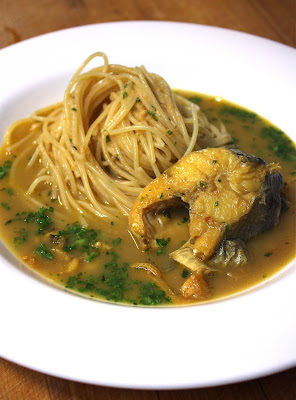 Following from the premise set forth in yesterday's post (see 3.174 Taste of South America: Cangrejo & Egg White Soup), I'm now asserting this dish to be the "Taste of Antarctica."  Here's the unassailable logic: Italy and France share a research base on Antarctica, where fresh fish is bound to be abundantly available just by drilling a fishing hole through the ice just outside the door to the kitchen, so the French are likely to make bouillabaisse with the day's catch on occasion, likely prompting the Italians to insist on using the broth as a sauce for pasta, which is bound to be stocked through the roof in the same kitchen. It makes perfect sense.
2 comments: Links to this post 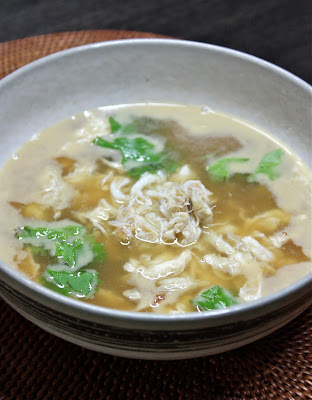 So long as McDonald's Korea is cooking up random dishes and attributing each one to an entire continent as the representative "taste" of that continent (see most recently 3.173 Taste of Europe: Pomodoro Chicken Burger), and South America is the only permanently inhabited continent on earth that's not being so honored, I've decided to fill the void with a dish that I just invented on the fly tonight, which I hereby declare to be the "Taste of South America."  I mean, they eat crab in South America, right?  And eggs whites?  In soup?  With cilantro?  Good enough--my logic is likely stronger than whatever the company employed in their development process for the actual promotion. And using the Spanish "cangrejo" for "crab" makes it even more legit.

Incidentally, I was going for a Thai vibe while making the soup, which included ginger and garlic and lemon juice in addition to the main ingredients.

The "Taste of Antarctica" is next.
No comments: Links to this post