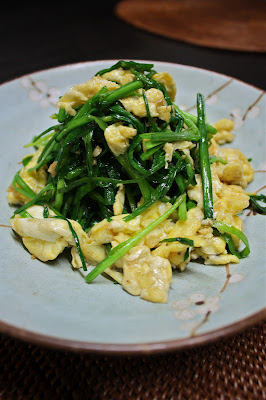 with Wife, Dominic, and Mother-in-Law

In the comments under a prior post, Number One Fan Lisa asked me to translate the Korean terms for various members of the onion family into English (see 2.338 Pa-Dak). The post featured the Korean ingredient pa (파), which I'd referred to in English as "leek."  Lisa was skeptical.  I broke down the list to the best of my knowledge, based admittedly on nothing more than personal observation. It turns out that I was kinda right about most of it, but not really.

With tonight's dish featuring a type of onion whose name may also not be amenable to precise translation from Korean to English, I did some actual research this time.  Here are the results (English to Korean):

- shallot, multiplier onion = Allium cepa var. aggregatum, formerly Allium ascalonicum (when it was classified as a separate species from the common onion) = no Korean term

- chive = Allium schoenoprasum = no Korean term (recent use of this relatively new item, which is often referred to by its English name, has given rise to the neologisms "geon-gang (health) buchu" (건강부추) or "yeong-yang (nutrition) buchu," though neither term is official, as far as I could ascertain)

In doing the research, I learned a few things: (i) garlic is part of the onion family, which seems rather obvious, now that I think about it; (ii) indeed, the genus category "Allium" derives from the Latin for "garlic," even though it's always referred to as the "onion family;" (iii) both "shallot" and "scallion" derive from "Ashkelon," the name of a city in Israel; and (iv) scallion isn't an actual species in itself (!). 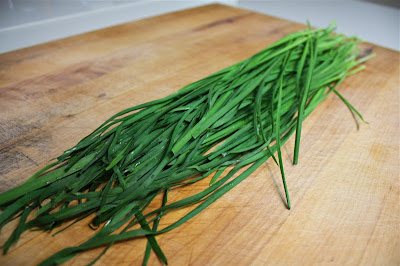 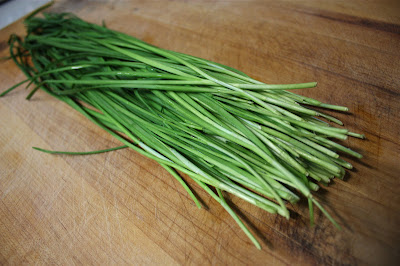 Buchu are quite distinct from other onion family members.   In appearance, they're like slender bulbless scallions with flat scapes, similar to grass.  In fact, I find them to taste somewhat grassy, or somewhat reminiscent of a leafy green, though some sources describe their flavor as being garlicky--hence "garlic chive."  Texturally, again like grass, they're chewy rather than snappy, especially when cooked.

I developed the dish here based on something that a previous nanny of ours had often prepared.  Taking her basic recipe, which consisted of scrambling an egg, then tossing in the buchu with a liberal amount of oil and soy sauce, my revisions include adding minced garlic and ginger and seasoning with oyster sauce and white pepper.  It's one of the simplest, quickest, cheapest, tastiest, nutritiousest dishes that I do. 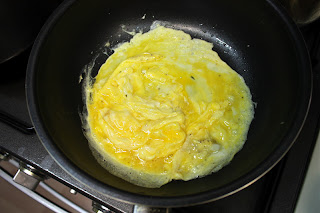 On high heat, scramble 2 eggs in 2 tsp canola oil until starting to set.
Season with salt.
Set aside. 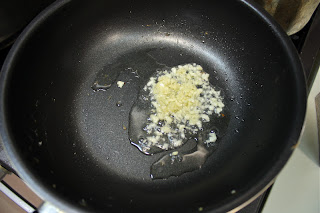 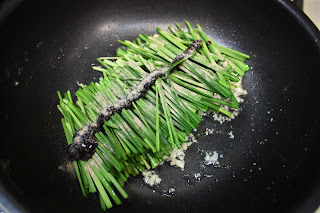 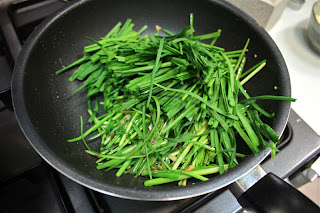 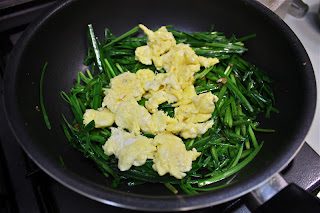