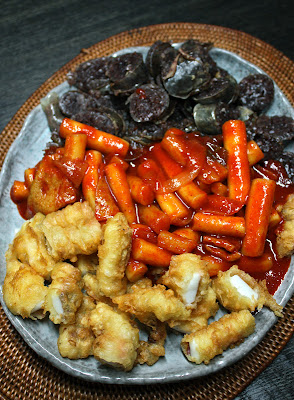 
This is in continuation of a recent post discussing food carts in Korea (see previously 3.134 Sundae in Ddeokbokki Sauce).

The kind of cart that I'm referring to here is to be distinguished from a pojang macha (see 1.272 Deep-Fried Quail), the main purpose of which is to serves alcohol along with various dishes intended as anju, accompaniments for the alcohol, rather than as meals per se.  From the outside, the two can sometimes look the same, especially when mobilized from the back of a pickup truck. If the setup is somewhat quasi-permanent, as the cart here, it's likely not a pojang macha.  Aside from the food, as described below, the other obvious differences are location--one usually found near schools or residential areas, the other in back alleys near office buildings--and hours of operation--one usually open from lunch to midnight at the latest, the other from midnight to dawn. 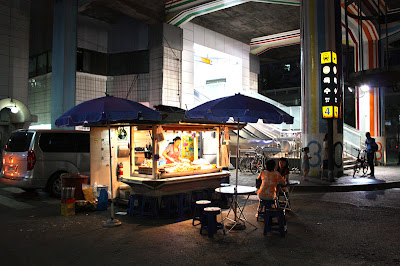 My favorite place is located at the base of Oksu Station's Exit 4; the food is great, the facilities are (relatively) clean, and the owners are nice; the only problem is that they're frequently closed for no apparent reason. 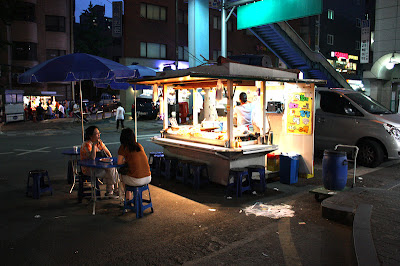 The other carts can be seen clustered in the left side of the frame (more below on the 2 seated customers).

Food carts of this type feature the same menu, more or less.  The standards include ddeokbokki (2,000 won), sundae (3,000 won), and various kinds of twigim (3,000 won for 3), which I regard as the holy trinity of Korean street food: three distinct tastes--spicy/sweet, earthy/bloody, savory/salty--and three distinct textures--chewy, crumbly, crispy, all in harmony.  (Another standard is odeng (see generally 2.159 Spicy Odeng Skewers) (500 won each), the broth of which is free.)  I like everything with ddeokbokki sauce, even though I don't really like ddeokbokki itself all that much.  I sometimes order ddeokbokki just for the sauce.  Fortunately, in Oksu-Dong, the proprietors are very generous, so they'll always provide sauce with an order of sundae or twigim if requested, often tossing in a few free rice cakes for good measure. A few years ago, a brick & mortar restaurant opened down the street that served these same dishes but refused to give free ddeokbokki sauce--it went under real quick. 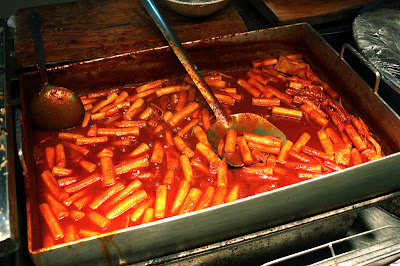 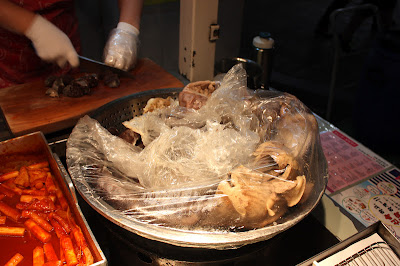 Someday, I'll post a better photo of this classic culinary icon featuring rolls of sundae sausages steaming in a tub along with various offal and ears (which I don't eat). 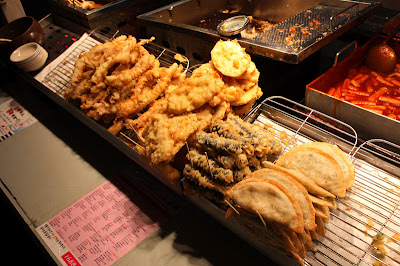 As for twigim, the options are usually more diverse but for some reason were limited this evening; from left: ojingeo (squid), goguma (sweet potatoes), kim-mari (seaweed rolled with noodles), mandu (dumplings).

Relating to the hygiene issue discussed in my prior post, I've always been a bit uneasy about twigim and odeng.  Twigim offerings are laid out uncovered in the open, right along the counter where customers sit and eat and talk, inadvertently or advertently spitting/spraying on the displayed food from time to time.  The pieces are deep-fried again in hot oil upon order, which probably kills most of the germs, but still.  As for the self-service odeng, it's eaten straight off bamboo skewers that may or may not be sufficiently washed between uses.  And the soy sauce for the odeng, back in the day, it used to come in a free-for-all dipping jar, which has since been supplemented with a ladle and individual sauce dishes, but I still see people on occasion diving right in.  Hep-K heaven. 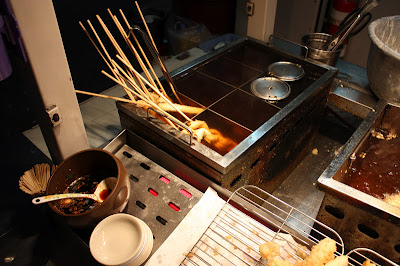 The following is a translation of the exchange that transpired between me, another customer, and her companion, as I was waiting to get my order after taking these photos.

Her: Are you planning on posting those photos somewhere?
Me: Maybe.
Her: Where?
Me: On my blog.
Her: Why would you post photos of us on your blog?
Me: I'm not.
Her: You just said you would.
Me: I meant the food.
Her: Why would you post photos of food?
Me: It's a food blog.
Her: What's a food blog?
Me: A blog about food.
Her: What kind of food?
Me: Any food.
Her: Good food?
Me: Sometimes.
Her: This place has good food.
Me: I know.
Her: This place is famous.
Me: I know.
Her: So why would you need to write about it?
Me: No need.  I just do it.
Her: How can I find the blog?
Me: It's on a foreign site.
Her: Are you a foreigner?
Me: No.
Her: Why is it on a foreign site?
Me: It's written in English.
Her: For foreigners?
Me: Not necessarily.
Her: So why do you write it in English?
Me: Because English is easier for me.
Her: But you said you're not a foreigner.
Me: No.
Her: You should target foreigners and recommend this place to them.
Her companion: What foreigner would come all the way to Korea and eat here?!
Me: I'm not recommending it.  I'm just writing about it.
Her: Then who reads your blog?
Me: Nobody. 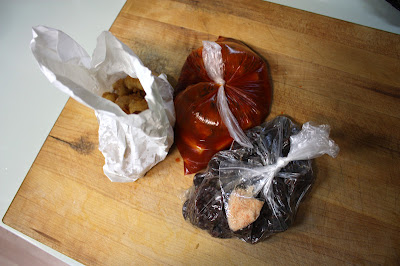