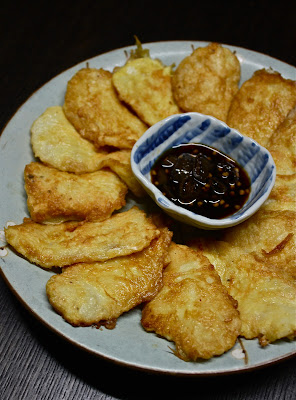 
This was my first solo attempt to make jeon (see generally 1.066 Assorted Jeon).  A few months ago, I'd assisted our nanny make some with sliced lotus root (see 3.102 Yeon-Geun Jeon), though my participation had consisted primarily of photographing the process. Here, from scratch, from memory, I tried my hand at the family favorite fish variation (see generally 2.283 Saengseon Jeon), which turned out to be a piece of (pan)cake.

In addition to simplicity, and taste, and convenience, and cost, what I appreciate about jeon is that it can be made well in advance and enjoyed at room temperature--even cold, straight out of the fridge.  In fact, I prefer jeon that's had time to rest for at least 10 minutes, allowing all the components to set and firm up a bit.

By the way, condiments aren't strictly necessary, particularly if the jeon is seasoned right.  Here, just for presentation purposes, I added the juice from a jar of soy-pickled chilies that my aunt had given me. 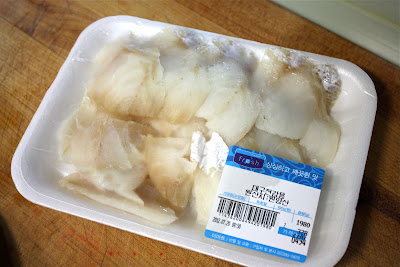 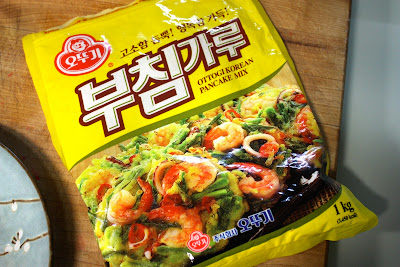 Easier still, instead of regular flour, this "Korean pancake mix" powder comes slightly seasoned and contains a touch of corn starch for added crisp; it's something of a cheat, but one that most home chefs use without a twinge of remorse.


400 g sliced cod (in Korean, "daegu (대구)") (any firm white fish will do) (if working from whole fillets, slice the fish into pieces each around 0.5 cm thick and not more than a finger's length)
1 cup all-purpose flour (or the pancake mix)
1 tbsp corn starch (optional)
2 eggs
3/4 tsp salt (only 1/2 tsp if using the pancake mix) (only 1/4 tsp if serving with soy sauce)
1/4 tsp ground white pepper (not traditional, but I like pepper in everything)
1/2 cup (more/less) soybean oil (as explained in the aforementioned post on lotus roots, soybean oil is considered ideal, but I prefer canola for its lighter texture) (avoid olive oil, especially EVOO, which has a strong flavor that makes Korean food taste distinctly non-Korean) 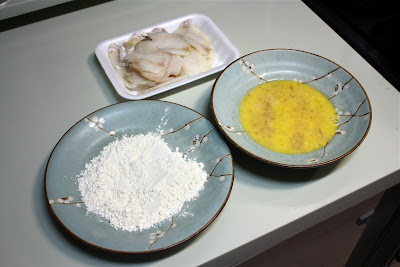 1.  Combine the flour and corn starch in a shallow plate.

2.  Beat the eggs with the salt and pepper and pour into a deep(er) plate.

3.  In a skillet over low-medium heat, pour enough oil to cover the bottom in a 2-mm layer. 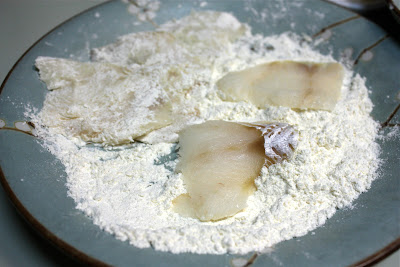 4.  Working in batches of as many pieces that will fit comfortably in the skillet without overlap, dredge each slice of fish in the flour and corn starch mixture and dust off the excess. 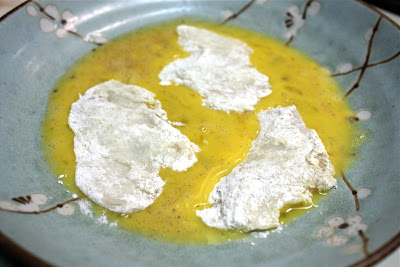 5.  Dip the pieces in the egg wash, covering both sides of the fish, and transfer them immediately to the skillet (tip: hold the plate containing the egg wash directly over the skillet to facilitate the transfer, which will unavoidably entail errant drops of egg wash). 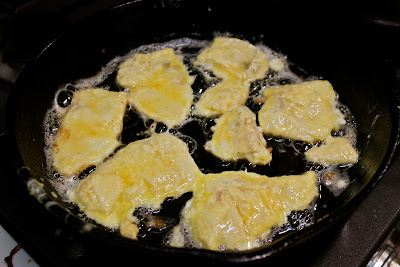 6.  Cook for about 1 minute, just until the coating turns golden brown, flip (tip: rather than a spatula or tongs, use chopsticks to turn the pieces over, delicately, so as not to mangle the as-yet-uncooked egg wash on the upside), cook for another minute, then remove to a serving dish.
. 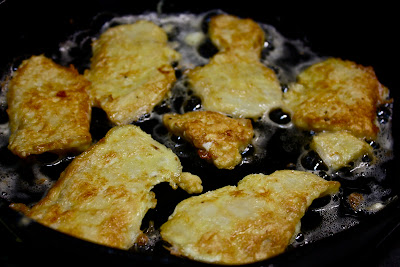 8.  As a main/side dish with rice and soup, serve as is or with a condiment of choice, typically a soy-based sauce, but hot sauces work, even ketchup. 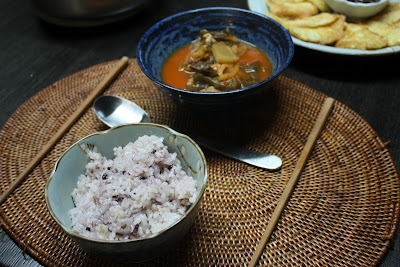