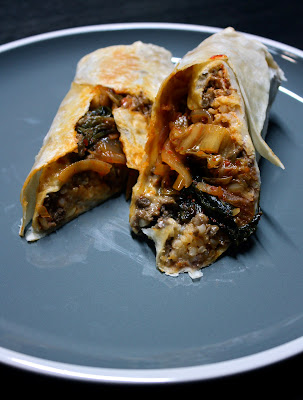 
With Korea and Mexico facing off in a preliminary round soccer match at the Olympics this evening, I made this beef & kimchi burrito in honor of both teams.  On the drive home, I'd been thinking wistfully that watching the match at Vatos (see most recently 3.181 Kimchi Carnitas Fries) over some kind of Korean-Mexican dish would be great, when I realized that I could just do the same at home.  The burrito, a frozen item that I'd purchased from Fog City International Cafe a few months back (see most recently 3.105 Chili-Salsa Dogs), I wrapped in foil and popped in the oven on high for about 30 minutes until done.  After sauteeing the kimchi in sesame oil with a splash of soy sauce and sprinkle of sugar, I opened up the burrito, added the kimchi, and rewrapped it.  Not bad.  But I was pleased by my cleverness.

As for categorizing the dish by national origin, I'm thinking that only an American would do something like this to bridge the two cuisines.  Anyway, burritos were supposedly invented in America.