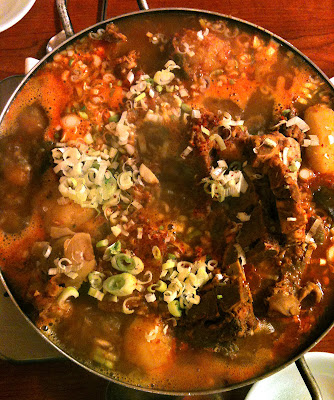 
For the longest time, I've been wanting to write a post featuring this gamja tang (see generally 3.226 Gamja Tang).  Previously, I'd never really liked the dish, but the one here changed my mind after a single bite: delectably tender chunks of meat falling off the vertebrae in a perfectly balanced, not-too-spicy, almost-sweet broth and, most remarkably, not a hint of the perilla employed by most other places as either or both a masking and/or flavoring agent, which had always put me off.  25,000 won for a small pot, enough for 3-4 servings.  Ironically, the restaurant serving this paradigm of a hardcore Korean stew is located in Itaewon, the country's largest/oldest foreign enclave more noted of course for ethnic eateries.  So, after a long night of ales and whiskies and tequilas and wings and ribs and tacos, as well as the loud music and the loudmouthed masses, it's become my go-to final destination for a wrap-up round of soju and gamja tang in peace and quiet.  The name of the place--"imo" technically refers to a maternal aunt but can be applied to someone roughly equivalent thereto (e.g., mom's girlfriend) or someone who plays some maternally auntish role (e.g., waitress (because mom's sisters are known for serving food, apparently)), while "ne" means "home/family of" and is often used like "chez" for restaurants--implies comfort.  I never got around to writing about it because something else earlier in the evening always seemed to take precedent.  But tonight, we started with fish & chips at The Wolfhound then headed straight here. 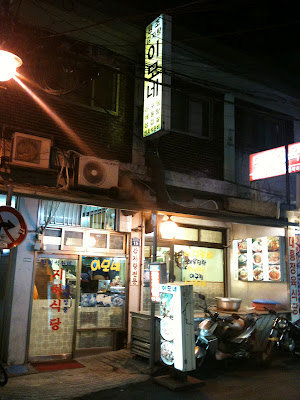 Located just across the alley from the transgender bars at the base of Hooker Hill. 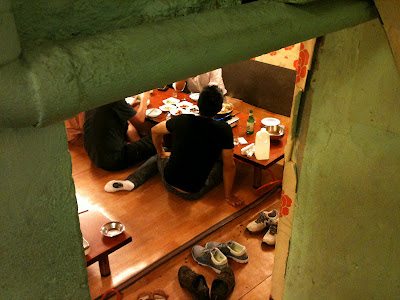 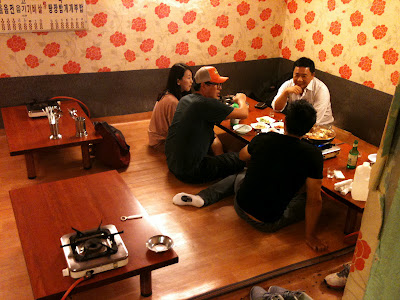 With just 3 tiny tables at ground level, the best seating is in the basement,
making it literally a hole-in-ground kind of establishment. 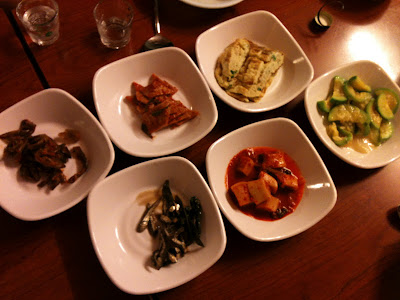 The sides are simple but good and plentiful.
No comments: Links to this post 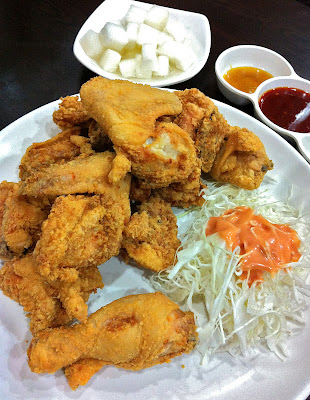 
Dominic is now participating in that most symbolically Korean yet practically useless of pastimes for boys his age: taekwondo.  To be clear, I'm not talking about taekwondo per se, which I'm sure is a kickass martial art when done right, but rather the cheap kiddie version available at the neighborhood hagwon.  While "hagwon" is often translated into English as "academy" or maybe "private learning institution," it can refer to any kind of structure or office space of any size where the (attempted) study of any subject at any level of difficulty or quality of instruction occurs.  Dominic's taekwondo hagwon, for example, is located in a commercial building on the 2nd floor between a beauty salon and a dry cleaners. The owner-teacher's credentials, displayed prominently in the entryway, seemed to be that taekwondo was his college major.  The kids seemed to spend most of the time running around and trying to take each other's belts.  In fact, we were there to support Dominic in his bid to earn a white-yellow belt.  Presumably for the sole purpose of providing students with incentive to keep coming back, these taekwondo hagwons have implemented an expanded hierarchy of belt colors that includes levels like "white-yellow" between the standard white and standard yellow.  Whatever the case, he got it. 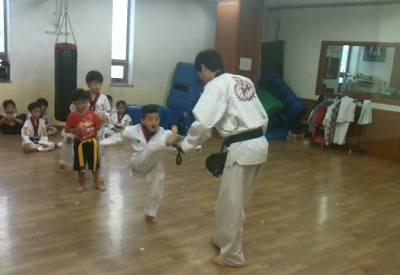 In celebration, we ate fried chicken at a pub on the first floor of the building.  We'd heard from other parents, who sometimes met up there after taekwondo, that the food was really good.  It wasn't. 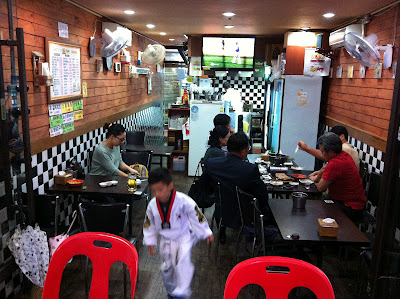