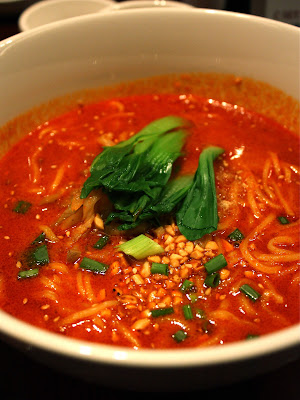 To verify that the xiaolongbao at Crystal Jade are as good as my first impression has left me to believe (see 3.187 Xiaolongbao), especially in light of the less-than-favorable impression that I had of the same dumplings more recently at Din Tai Fung (see 3.202 Steamed Shrimp & Pork Shaomai), we returned for another go.  Yes, they are that good, and way better than the ones at the other place.

We also tried this dish, which was described on the menu as "soup noodles with dried shrimp & peanut in spicy sauce."  Without ever having seen it elsewhere nor heard of anything like it, and not really in the mood to do any research on it, all I can provide here is a description of what was in the bowl.  Flour noodles, standard for all Chinese restaurants throughout Korea.  The broth, somewhere between a thick soup and a thin sauce in texture, had a distinct peanut flavor, bright red though surprisingly not very spicy. Topped with dried shrimp, crushed peanuts, minced scallions, and blanched bokchoy.  Overall, it was as weird as the description would suggest.  And totally overpriced at 14,000 won. 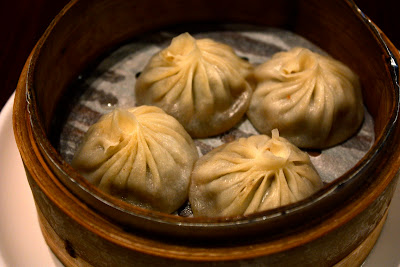 The spicy xiaolongbao seemed to be from the same recipe as the standard dish but with a heavy pinch of chili oil, the kind with chili flakes, that made them uncomfortably spicy in taste and unpleasantly gritty in texture.