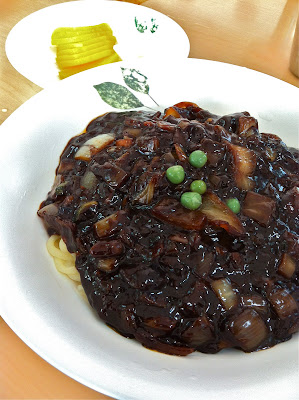 Less than 24 hours upon arrival, we were already bored.  Playtime in the stream was folded after about 5 minutes, the lack of rain having reduced the flow of fresh water to a bare trickle, which in turn allowed swarms of bugs to arise from the stagnant puddles forming amid the rocks.  No TV or internet (yet).  So we hopped in the car and headed for Wonju, the largest nearby city a bit over 20 kilos away from the cabin.  For those who've never been to Korea, let me explain that every city in this country is essentially the same, only larger or smaller in scale, all the same stores with the same goods, all the same restaurants with the same foods, the same things to do in the same places--which meant that we had no choice but to go shopping at the local E-Mart. 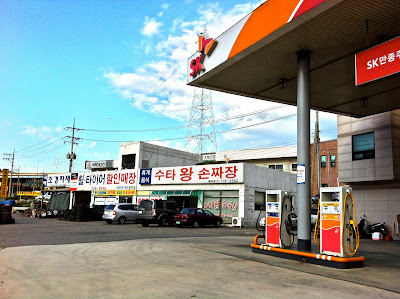 Along the way, a restaurant on the side of the road caught my attention.  It was nestled in a dingy building between a tire store on one side and a gas station on the other.  It didn't even have a name, just a plain white sign with simple red letters proclaiming the house specialty, somewhat redundantly: suta ("hand-made") wang ("jumbo") son ("hand") jjajang ("black bean sauce").  As described in many prior posts, I'm a sucker for black bean sauce noodles, especially when the noodles are made by hand (see generally 2.193 Jaengban Nakji Jjajang Myeon, most recently 3.073 Jjajang Myeon), so I'm always on the lookout. 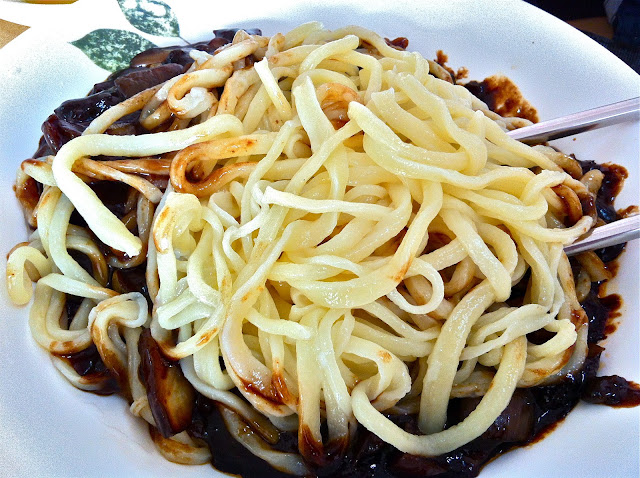 When made by hand, the noodles come naturally uneven, some thick, some thin, providing textural contrast in every bite.