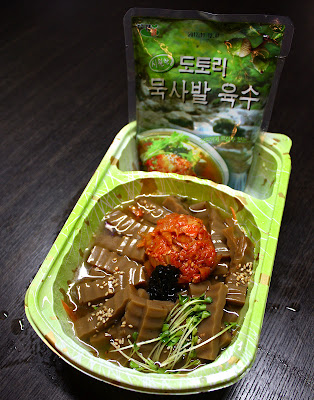 
While dotori muk is usually prepared as a salad with various sliced vegetables tossed together in a spicy soy dressing (see generally 2.299 Dotori Muk Muchim), another form of preparation consists of serving it in a chilled broth.  The broth is typically clear, anchovy-based, sweet-sour, similar to if not exactly like that of cheap mul naeng-myeon (see generally 3.065 Mul Naeng-Myeon).  Sliced cucumbers, cabbage, mixed greens, radish sprouts, kimchi, and dried laver are common additions.  The dish--"sabal" refers literally to the large bowl in which it is often served--may be served as an appetizer or sometimes as a main entree, the latter always striking me as rather odd, being a meal of jelly in liquid.

Either way, this end-of-the-day, priced-to-moved offering from E-Mart was well worth it.  If the ingredients held up better over time--alas, the pieces of muk get kinda crusty at the edges upon slicing, and the veggies quickly wilt--I'd buy a bunch of these packs and keep them in the fridge for convenient goodness. 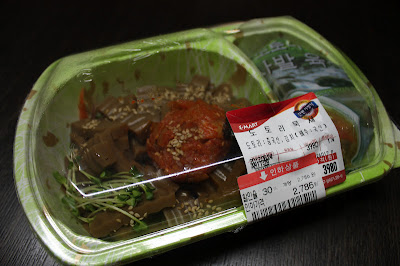 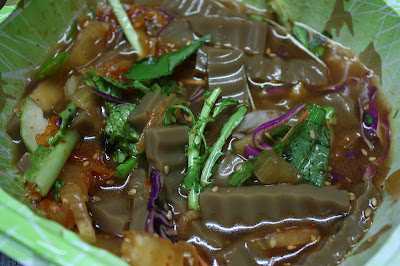