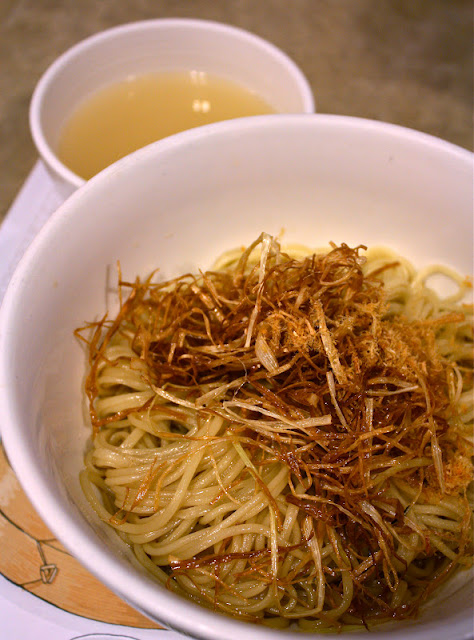 La mian is a type of Chinese noodle ("mian") (see Wikipedia's entry on la mian).  Basically, it's made by taking a piece of dough, usually simple flour, pulling it ("la") by hand into a long strand then folding it in half, and repeating the process multiple times, each time doubling the number of strands, which get thinner with each iteration.  Due to the intensive working of the dough, including slamming the strands on the countertop in between pulls, the resulting noodles are extremely chewy.  The technique is employed in some Chinese restaurants in Korea, where the noodles are referred to as "suta myeon" ("hand-struck noodles") (see most recently 3.215 Jjajang Myeon).  Incidentally, the term "la mian" is thought to be the origin of "ramen," according to some sources, including my Macbook dictionary and Collins English Dictionary (via dictionary.com), though Wikipedia offers some interesting alternatives (see Wikipedia's entry on ramen). 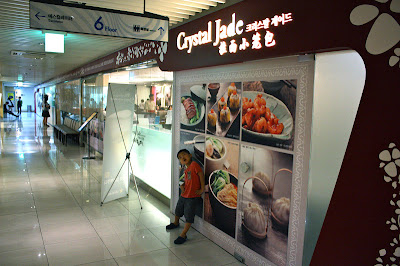 Crystal Jade La Mian Xiao Long Bao--part of the Singapore-based Crystal Jade empire that owns/operates Chinese restaurants of varying types throughout the world--specializes in la mian, as well as the chain's claim-to-fame xialongbao (see 3.187 Xiaolongbao).  Since my first Crystal Jade experience in Hong Kong (see 2.332 Sauteed Gailan with Ginger), which directly gave rise to my current obsession with xialongbao in general and Crystal Jade's xialongbao in particular, I've become a regular customer at Crystal Jade Shanghai Delights, a more casual outlet with a smaller/cheaper menu (no la mian) located on the restaurant floor of Hyundai Department Store in Apgujeong-Dong (see most recently 3.213 Ddan-Ddan Myeon).  The wife and Dominic are also ardent fans.  So, while we were in Myeong-Dong to buy the kids some new clothes at H&M, located by happy coincidence in the same building as Crystal Jade La Mian Xiao Long Bao, where to eat dinner was a no-brainer. 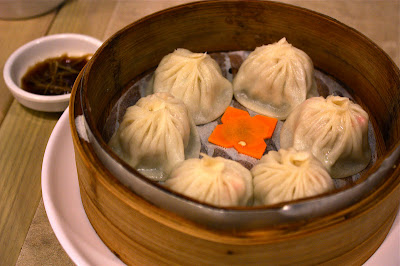 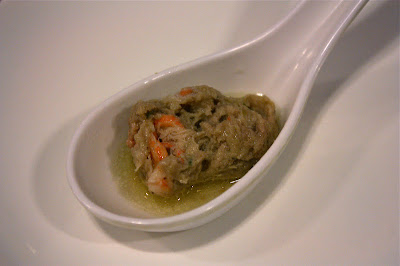 The crab & pork xialongbao (3.0), more expensive but not as good as the standard. 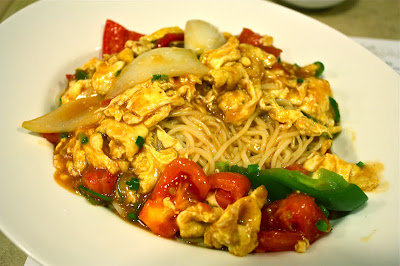 This la mian dish blew me away.  Initially, my curiosity was piqued by seeing a "chef''s recommendation" symbol affixed to a menu item, the description and photo for which didn't inspire any confidence.  But when I asked the server about it, she was unequivocally enthusiastic, acknowledging that it didn't sound or look like much while assuring me that it was amazing beyond belief.  She was right.  The scallions (daepa (see generally 3.154 Stir-Fried Buchu & Eggs)) were sliced thin and fried in oil to a perfect, almost-burnt crisp, resulting in an intensely bittersweet garlicky flavor, further enhanced with the addition of soy sauce and white pepper.  The noodles were tossed in the oil and served in a large bowl with the onion topping, plus a sprinkle of dried shrimp powder.  It was accompanied by a chicken broth that could be poured sipped separately or poured into the bowl to make a noodle soup according to personal preference.  I tried it both dry and soupy, and both were excellent.  Simple and amazing.  Totally unique.  And just 8,000 won. 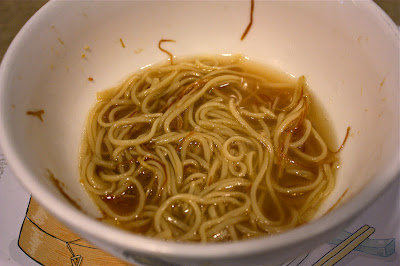 With the chicken stock.