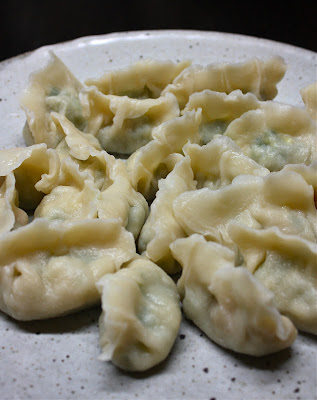 Seeing as how I'd enjoyed them so much before (see 3.261 Pan-Fried Buchu-Egg Mandu), our nanny decided to make the dumplings for me again, just 4 days later.  If only to avoid eating the exact same thing twice in such a short interval, I suggested adding shrimp as a variation on the theme.  Although it went somewhat against the concept of simplicity that she'd espoused for these dumplings, she couldn't really object.  I thawed some frozen shrimp from the freezer, minced them, seasoned them with soy sauce, grated ginger, and white pepper, and added them to her basic buchu and egg stuffing.  She did the rest like before.  Only this time, she boiled them.   In the end, the mandu turned out okay, but no better than the previous batch, despite the extra shrimp.  Maybe we hadn't used enough shrimp, but the flavor just didn't come through.  And being boiled, I missed the crunch of the pan-frying. 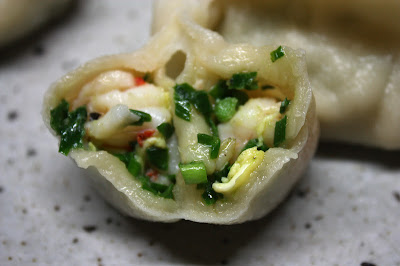